81-year-old widow gets a breakthrough 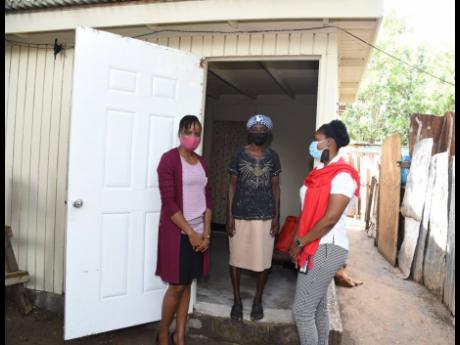 Unlike many small charities whose activities have been stymied because of a reduction in funding during the pandemic, the Widow’s Mite Legacy Foundation took the bold step of constructing a one-bedroom board house for an 81-year-old widow.

Gloria Peterkin, the widow, had been hoping for a breakthrough for years. She wanted a house for herself in Gregory Park, St Catherine, before her husband, Jonathan, died in 2019, because the space she occupied was in a deplorable condition.

Tasha Gordon, co-founder of Widow’s Mite Legacy Foundation, knew of Peterkin’s plight, and her knowledge about it pushed her to raise funds to build a one-bedroom house for Peterkin, through her charity.

Gordon told The Gleaner that she became aware of Peterkin’s unsuitable living condition when she visited her church sister’s house. Peterkin was living next door with her sick husband. She recalled hearing a report about how the elderly woman tried to light a coal stove in the rain to cook for herself and her husband.

Members of the Widow’s Mite Legacy Foundation did not just want to give Peterkin some items of food, etc., they wanted to construct a house for her that would be a more permanent solution to her situation.

“We had limited funds but we wanted to make a tangible difference and so we visited the site to assess the extent of the need and what it would cost,” Gordon recalled.

Following the assessment and a series of events, Gordon then contacted a church brother, who is also the chief executive officer of Tradesman Construction, to support the cause by offering his skills and expertise.

“We hired him to undertake the project at a discounted cost of almost $100,000, which included demolition of the old structure. Prior to that, the foundation organised a T1-11/Ply Drive where we raised funds to buy those construction items. It should be noted that this was the most expensive material that was needed for the project,” she said.

Gordon emphasised that both paying for the material and raising funds for the house’s construction was a very costly and faith-filled journey for the Widow’s Mite Legacy Foundation. However, the group was adamant about providing appropriate shelter for Peterkin.

“It has been a very long journey. I’ve been discouraged many times when we saw that the money wasn’t coming in. It was stressful,” she told The Gleaner.

“The struggle is real, but God is doing it through us,” she said.

The house is now completed, but the project is not, as the tiles have not yet been installed and there is a need for a bathroom renovation. However, Peterkin is willing to move inside at the end of September until the other components are addressed.

The team also bought a used refrigerator and another member donated a bed frame to pair with the mattress Peterkin already has. The house was painted by Peterkin’s grandson.

In a recent telephone interview with The Gleaner, Peterkin rejoiced about her new house which she will soon step into.

“I am thankful that they have helped me. I am grateful,” she said.

The team from Widow’s Mite Legacy Foundation wants to help Peterkin in other ways, and is brainstorming about how to make that happen.

Given that this project has forced them to use up the funds they had, they are now strapped for cash, and with the festive season approaching, the foundation fears that they may not be able to support other families as they traditionally do.

“Right now, our kitty is totally empty. As a matter of fact, we’re in the negative. I’ve actually been using my personal money to pay for some outstanding components for Mrs Peterkin’s house, but this will not stop us from continuing with our mission of doing all the good we can with whatever we have. God remains faithful so we will remain focused on paying it forward by showing love with our actions. We strongly believe that giving from the heart, no matter the quantity, honours God,” Gordon told The Gleaner.

She added, “For the festive season, in the next month we want to do some fundraisers to try and get some money to put together packages to see how many families we assist. I also want to thank the members of the foundation for their continued support and prayers. Without them, this project would not have been a success.”

The charity has assisted about 20 families since its inception in 2018.