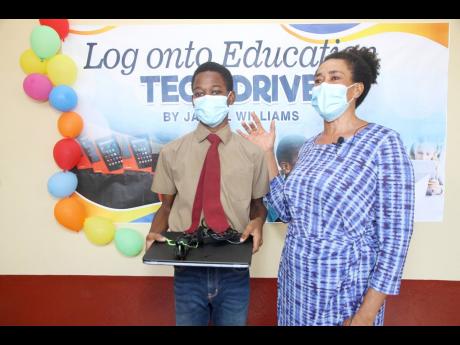 Nathaniel Stewart
Dorrett Allen, mother of Glenmuir High School grade -0 student Bryan Sharpe, thanks Jaleel Williams, upper-sixth-form student, for the computer her son received. She shared the difficulty they had sharing her phone for him to attend classes and complete assignments.

Jaleel Williams, who is now in his final year of sixth form at Glenmuir High School, said he could not ignore the needs of his fellow students for gadgets to accommodate their classes.

Cognisant of the fact that many were struggling with online classes as a result of the lack, he said he felt compelled to do something about it. That ‘something’ was a GoFundMe campaign which his older brother organised for him, as well as support giving by his family, other relatives and friends.

The campaign, dubbed ‘Log Onto Education Tech Drive’, earned enough funds for him to purchase 20 tablets. He was given one laptop from a friend and having got an upgraded laptop, he donated the one he previously owned.

Commenting on his drive and motivation, Williams said after he became aware of just how many children in the country did not have access to online learning, resulting from the lack of a device, he decided he would try to reduce the number, “even if it was just a little bit”.

“I hope the devices will help my fellow students to achieve more in their academics and will also enable them to do more,” he shared with The Gleaner at the handover ceremony at the school on Monday.

Williams’ mother, Stacy, who was on hand to assist, in expressing pride in her son’s desire to make a difference, said they are all “vessels of God used to answer the prayers of those who needed them the most”.

She also used the opportunity to encourage other students to not look at their situations, but to work hard just the same. His mother noted that when Jaleel started Glenmuir he was placed in what was deemed the worst stream in the school.

“Just look at him now. So it doesn’t matter what your place, it matters what you do,” she stated.

She also noted that the gadget drive will be ongoing, and they are hoping that more persons will come on board so that more students can be impacted.