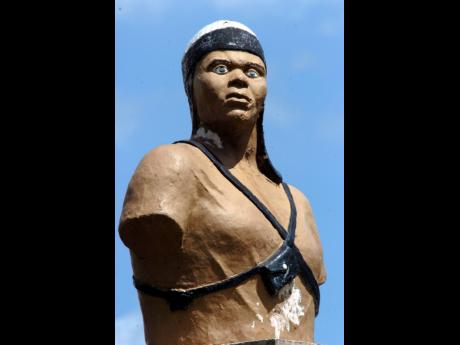 File
The bust of Maroon warrior Cudjoe, which was is erected in the square in Chapelton.

The term cimarron was used by Spanish colonists to refer to the enslaved who had escaped into the hills and mountains of the interior of Jamaica. After the British arrived in 1655 and wrestled the island from the Spaniards, many of their enslaved went to join the Cimaroons. Eventually, the term was shortened to Maroons.

The Maroons plundered plantations mainly in the hills of Clarendon and the north and east of the colony for whatever they needed. Joined by some more runaways, they became a menace to planters and other inhabitants. A revolt in Clarendon in 1690 saw more runaways joining the rebels. The colony was thus over-run by several gangs led by different people.

When the colonists stepped up their efforts to wage war against the runaways, they reacted by electing Cudjoe, a Coromantee, regarded as a bold, skillful, and enterprising man, their leader. Cudjoe, in turn, appointed his brothers Johnny and Accompong his second in command and Cuffee and Quao his sub-captains.

Cudjoe and his men in Clarendon were joined by the Cottawood Maroons of St George’s (Portland). Other bands of rebels put themselves under Cudjoe’s leadership. They included a set of Africans called the Madagascars, who had run away from a plantation in Lacovia, St Elizabeth. And in about 1730, when the first Maroon War started, the term Maroon was used to refer to all who had defied the colonists. They took on a mentality of attack and defend. Their main strategy was to ambush and surprise. Guns and ammunition were confiscated from defeated colonists or bought in the slave markets.

By 1737, Cudjoe’s forces were the torment of the colonists, who themselves were not backing down. The government established forts at Cave River and in other parts of the island to get close to the Maroons and to cut down on travelling time. At Cave River, independent companies and rangers were stationed to support regular troops. They were joined by the Blackshots (Africans opposed to the Maroons) and Mosquito Indians. There were many raids on some of Cudjoe’s stations. And though he might have lost some men in skirmishes, the loss was always greater on the side of the colonists and their back-ups.

With the colonists operating too close to him, and the communication between him and the roving Maroons of Clarendon cut off, Cudjoe decided to change position, and removed to a place called Petty River Bottom located in the Cockpit Country of St James and Trelawny. It was rugged and not easily accessible to outsiders.

There, he settled in a cockpit of seven acres of rocky land. It was a natural fort. The topography, the massive rocks, the bushes and the springs were used to great effect. The place was also strategically located near to other parishes where the government did not have much defence. He dispatched small parties all over the place to get food, arms, and ammunition. Yet, he knew what was going on in the region of his former haunt in Clarendon.

To provide defence in the south, Cudjoe strengthened the body of men under the command of his brother, Accompong. He established them just below the border of St James, above the Nassau Mountains in St Elizabeth. That place is now called Accompong Town.

The strategy worked, and Cudjoe and his people had free rein over the region, living a life undisturbed by the colonists, and were steadfast in maintaining their freedom. To say they were on a rampage is an understatement. Obeying the instructions of Cudjoe, the Maroons had no mercy on the captured colonists whose ignorance of the geography of the place was a defeat in itself. All over the region the Maroons surprised the clueless colonists, many of whom were mere youths.

For about eight years,the Maroons were unrelenting in their efforts to frustrate and annoy the colonists. Force after force was formed to wipe them out, but the hostility towards the colonists and other people was intensified. To put an end, once and for all, to such hostility, the colonists gathered all their resources, including volunteers.

A large group of people was assembled under the command of Colonel Guthrie of the militia and Captain Sadler of the regular forces. However, the morale among them was low and confidence doubtful. They could not afford to be defeated wholescale. Failure would strengthen the resolve of the Maroons to continue their onslaught, weaken government forces, and inspire the enslaved to run away to join the Maroons. The governor, Edward Trelawny, was thus advised by his inner political circle to offer the Maroons peace.

This peace was urgent for the colonists as the hostilities from, and defeats by, the Maroons were embarrassing them and wearing them out. Guthrie and Sadler then rushed news of the offer to Cudjoe, who called in his detachments. Yet, the Maroons doubted the sincerity of the colonists, and the offer was viewed with much distrust. Cautious, Cudjoe arranged his men strategically around and within the town. He ordered his scouts not to fire a shot. In their camouflage they waited for the approach of the representatives.

Guthrie and his troops trudged on under the unseen watchful eyes of the Maroons. When he got near to the settlement, he shouted,that saying he had gone to offer peace. From there a series of things happened for the Maroons were not letting their guard down. They were all armed with guns and cutlasses. The colonists pleaded, begging for peace.

Eventually, Cudjoe, a short, stocky, hunch-backed man appeared. His eyes were fixed on Guthrie and the troops. After all the stand-off and palpable tension, a treaty was concluded with Cudjoe by Colonel Guthrie and Captain Sadler under a big cotton tree growing in the middle of the town. One chapter of the first Maroon War was closed. The other was unfolding between the colonists and the Windward Maroons in Portland.