‘I want to break down barriers’ 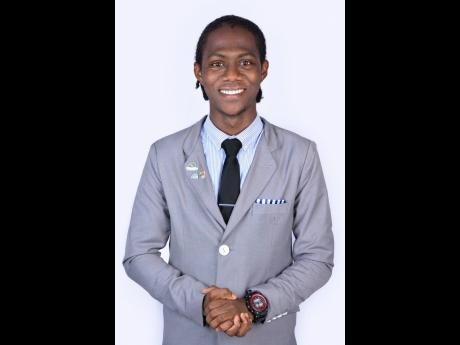 Poverty continues to be one of the key issues and contributing factors preventing many young people from advancing academically, as they seek to pursue tertiary-level education.

Rashaun Stewart has had a first-hand experience with how daunting the academic journey can be when coming from humble beginnings, coupled with being from a community affected by high levels of crime and violence. Stewart grew up in Mount Salem, Montego Bay, the first community to have been declared a zone of special operation, a crime-fighting strategy and intervention implemented by the Government of Jamaica in 2017.

According to UNICEF, even though most children in Jamaica have access to publicly financed education, many are affected by poverty which frequently results in absenteeism, persistent underperformance, and, in some circumstances, inability to complete their education. This has become especially true for boys from low-income families in both rural and urban locations.

“Given that I grew up in that situation, things were not necessarily ideal. It impacted my learning ... I couldn’t study for fear of my safety, but overtime I’ve just become used to it, I suppose, so it’s not something that bothers me quite as much nowadays,” Stewart told The Gleaner recently.

Nonetheless, the 21-year-old, third-year medical student at The University of the West Indies, Mona, has prevailed over some of his life-challenging obstacles that attempted to obstruct his academic progress, and has been recognised on an international level, having been shortlisted for the Chegg.org Global Student Prize.

Being among the top 50 finalists chosen from over 3,500 nominations and applications from 94 countries worldwide, Stewart is the only applicant from Jamaica and the Caribbean who has been selected.

The Global Student Prize will award a whopping US$100,000 to the winner, one who is considered an extraordinary, deserving student, who has made a good influence on learning, and on their peers’ lives and society at large.

This announcement will be made in November, following a further scaling down to the top 10 students in October.

“Words cannot capture the sheer magnitude of how happy and overjoyed I am,” Stewart told The Gleaner as he revealed that he did not expect to make it this far in the global running of the programme. This was especially so as he had initially missed the deadline of April 28 for applying. However, the application time was extended to May 16, and he was able to submit his application comprising a submission of eight essays detailing academic accomplishments and a robust discussion on community and global development, two days before the new deadline.

As an only child to his parents, Christopher and Tasawn Stewart, Rashaun is the first to pursue tertiary-level education in his family. “Everyone has expressed their pride and appreciation of what it is that I’ve been doing,” he added. Making special mention of his mother, Stewart said she has been his number one cheerleader.

“There’s my dad as well, but honestly, mom takes the cake! She’s a hundred per cent supportive, assisting me in every way that she can.”

But before Stewart had any possibility of getting this far, he had to struggle to keep up with his studies despite the community’s nefarious activities with many nights being surrounded by a barrage of gunfire associated with gang violence, making it impossible for him to concentrate on his studies at Cornwall College. As such, he has had to search for ways to get by.

“Coping comes back to family,” said Stewart, as his parents has helped him to get through such difficult moments.

“They were a source of solace in those times,” he added, as he also turned to God for help. Subscribing to the Jehovah’s Witnesses faith and being an active member in the church, Stewart went to God in prayer about his challenges and read scriptures as a source of motivation to carry him through the experience.

Through God and hard work, he was able to maintain good grades in school. He also looked out for his peers and fellow schoolmates as former head boy. While in his final year at Cornwall College, he spearheaded a funding drive which raised $90,000 so that students who were disadvantaged could receive assistance and some of the funds were used to meet other necessary demands.

After achieving high grades in two units of six Caribbean Advanced Proficiency Examinations, Stewart was on the hunt for funding for his academic pursuits.

“It’s always been medicine. I’ve never had anything but medicine in my head,” said Stewart. With recognising that medicine was not an easy career path to get into, describing it as an “herculean task”, Stewart was persistent in getting the job done. “I stopped at nothing to ensure that I got in, to pursue what I wanted to do,” he added.

This was done deliberately, as Stewart’s family’s financial burdens were always at the forefront of his mind. After exhaustedly applying for numerous scholarships, he was awarded with three which were able to fund a significant chunk of his over $4-million tuition, which is subject to annual increases.

“It has become increasingly unaffordable,” he said for his parents to fund his tuition as he advances on a yearly basis with the goal of completing his five-year degree programme. Acknowledging his parent’s best efforts to cover other expenses, such as utilities and his medical equipment which cost several hundred US dollars, since year, he has been working part-time, pursuing his second passion – journalism – as a columnist at the Western Mirror. This would aid in supporting himself so that his parents would not have to.

His father is the family’s sole breadwinner, as his mother is now unemployed after quitting her job 17 months ago to care for her then severely ill mother.

Currently, as learning continues online, Stewart has not had a functional laptop in over two years. Heavily relying on an iPad which was gifted to him a few years ago, he has had to use it for exams and assignments, among other things. His major challenge is contending with the fluctuation and unreliability of Internet connections and electricity issues, which caused him to lose 10 minutes in the midst of a two-hour exam last semester.

Coinciding with this, Stewart has also found it very difficult to keep up with his online classes. “Being online, given the very practical nature of the degree has been a challenge and learning anatomical aspects has proven to be spectacularly difficult.”

Prior to the COVID-19 pandemic, students would have had hands-on experience with human remains donated to the university for teaching purposes. Now, they have been facing some deficiencies in the learning process because of incidents like this, said Stewart.

Resolved to continue his pursuit in career progression, drawing inspiration from a variety of sources, Stewart is currently working hard to find new ways to earn money in order to complete this task and to support himself while doing so.

“I’ve always wanted to achieve upward mobility; Mount Salem is not necessarily the most hospitable communities to reside. I want to break down barriers, shatter the glass ceiling and fly ... soar to the sky!” he exclaimed.