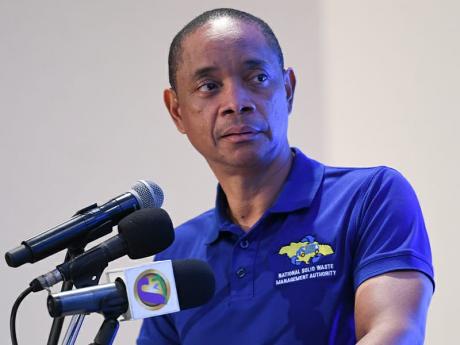 Chung... the NSWMA's Audit sub-committee has been very active and has uncovered many administrative breaches.

The National Solid Waste Management Authority (NSWMA) is reporting based on a preliminary review, that the payment system fraud at the entity is around $30 million.

The matter involves one of the NSWMA's regional subsidiaries, the MPM Waste Management Limited.

Earlier today, The Gleaner reported that three people including a senior employee have been separated from the entity.

Another is now the subject of an internal disciplinary hearing.

At the same time, the Major Organised Crime and Anti-Corruption Agency has been called in to investigate the matter.

At a press conference Monday evening, Norman Brown, the chairman of the NSWMA's audit sub-committee said some $30 plus million in payments by the entity is being probed to determine whether the agency got value for money.

"That's the major concern that we have," he said.

In the meantime, Chairman Dennis Chung has declared that the NSWMA will be unrelenting in weeding out corruption.

He said the Auditor General is also investigating the matter.

According to Chung, the irregularities were uncovered through a new audit system at the public cleansing entity.

Chung also said the NSWMA's audit sub-committee has been very active and has uncovered many administrative breaches.

"We're proud to report that in 87 per cent of the cases we have had positive resolutions up from 60 per cent maybe a year or two ago," he said.

In the past two decades, the NSWMA has been rocked by a series of scandals.

It has also been the subject of external audits and investigations that have found the entity wanting.