MPs to get $1 million for resilience building 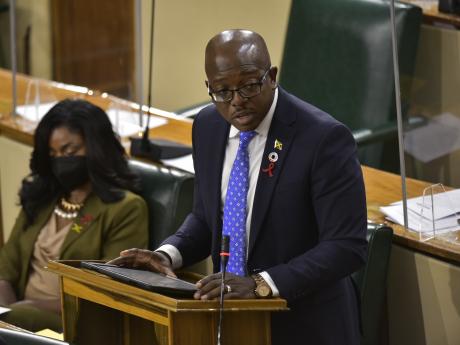 Minister of Housing and Urban Renewal Pearnel Charles Jr. speaking during the sitting of the House of Representatives on November 30, 2021 - Contributed photo.

The Government has allocated $1 million to each Member of Parliament to support resilience building efforts in constituencies across Jamaica.

Minister of Housing and Urban Renewal Pearnel Charles Jr. said that the Ministry will be working with all Members of Parliament to identify those households at greatest risk.

“The Ministry will provide directions and support for the initiative, and I implore colleagues on both sides of the House to submit the requested information at the soonest and no later than February 2022,” he told House of Representatives on Tuesday.

Charles Jr. noted that climate-related disasters have been the primary drivers of internal displacement over the past decade.

“Just earlier this month, the downpour in St James forced many families to leave their houses consequent to the devastating flooding. Undoubtedly, we must prioritise resilience building while we seek to mitigate the inevitable,” he said.

“So, I simply cannot tackle the right for housing without speaking about the implications of climate change. As climate change intensifies, housing stability will be increasingly under threat. Housing is the primary determinant of people's financial security and well-being, and while the impacts of climate change are felt in every sphere of our lives, whether directly or indirectly, our housing sector for obvious reasons is especially vulnerable,” he added.

He noted that this vulnerability is pronounced for those persons in the low-income bracket and those residing in informal settlements, who often live-in sub-standard housing.

“This is exacerbated when we build on hillsides, along gully banks and in river courses. Parliament will recall, for example, the significant impact of Tropical Storms Zeta and Eta in late October 2020. In the Shooters Hill area, 74 per cent of the residents surveyed suffered damage to their houses, ranging from major to catastrophic, while in Weisse Road 31 per cent of those surveyed described the damage suffered as catastrophic,” Charles Jr. said.