Insurance sector on the rebound, with COVID battle scars 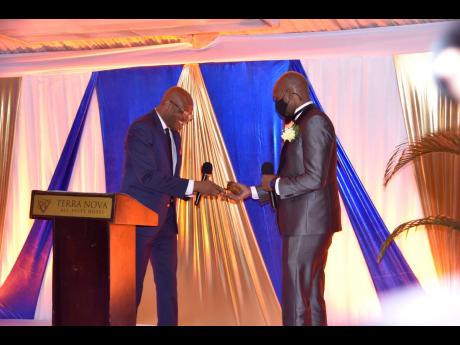 Nicholas Nunes/Photographer
Nehemiah Perry (left), immediate past president of the Jamaica Association of Insurance and Financial Advisors, hands over the baton of responsibility to his successor, Otis Hamilton, at an inauguration ceremony at Terra Nova Hotel on Saturday. Hamilton is the 68th president of the organisation.

The ongoing coronavirus pandemic has dealt a blow to the insurance industry, with a fallout in premiums causing job losses among sales agents who are the foot soldiers that keep the sector afloat and growing. But, despite a seven per cent fall in...

The ongoing coronavirus pandemic has dealt a blow to the insurance industry, with a fallout in premiums causing job losses among sales agents who are the foot soldiers that keep the sector afloat and growing.

But, despite a seven per cent fall in insurance salespersons, the industry has seen a 12 per cent increase in new annualised premiums and a 14 per cent rise in new applications, said Orville Johnson, executive director of the Insurance Association of Jamaica (IAJ).

Those sentiments were corroborated by Otis Hamilton, new president of the Jamaica Association of Insurance and Financial Advisors (JAIFA),

Three waves have COVID-19 outbreaks have exacerbated the challenges of JAIFA’s 800-person membership, which has, predictably, lost some of its clientele.

“There was a major loss of customers. Firstly, when you have lockdowns and a reduction in employment and all of that … as you would expect, there will be a scenario when incomes get cut. When a person has to choose between their electricity bill and water bill and their life insurance, if one has to go, guess what it is? It is the life insurance policy,” said Hamilton, who was installed as the organisation’s 68th president on Saturday.

Consequentially, the premium pullback and annulment of some policies affected agents, who depend heavily on commission for remuneration.

“We got a major shock last year. It hit us really bad, but, with great resilience, we have been coming back slowly but surely ... ,” he said.

“This year has been a much better year than last year. But I must tell you, we lost quite a bit of agents last year because they just could not go through that period,” he added.

Though not providing hard data, JAIFA reported a much higher rate of turnover, especially for younger agents. Older agents, with longstanding clients, were better able to survive on the buffer provided by established clientele.

The pressure on the industry remains intense, Johnson revealed, though the insurers are on a strong rebound.

He told the gathering that, in 2020, the insurance industry paid out J$20 billion in benefits to policyholders.

Year 2021 projections will be higher, he said, with death claims from January to August up 49 per cent more than last year. Illness claims are up 35 per cent, he added.

Nehemiah Perry, immediate past president of JAIFA, said that the organisation has sought to urge its membership to become more tech savvy, including reliance on the usage of electronic signatures.

Guardian Group is one such insurer that has had to re-evaluate its operations.

“It has been impacting how we operate from last year to now. It has forced us to change some of our operations in terms of pivoting. So, we have looked at our people, processes, and our products,” he told The Gleaner.

Gordon has cast the stumbling blocks posed by the pandemic as springboards, forcing Guardian to rethink its strategy, which has contributed to an improvement in its operations and product offerings. Though not disclosing aggregate numbers, he revealed that the Guardian Group has seen recovery in 2021, with business growing by more than 46 per cent.

“In 2020, in the initial stages, we met our revised target and, year to date, we have exceeded the prior year. We have exceeded 2019, which we call the normalised year, so we have done better in the two years.”

Hamilton has pledged to place priority on seeking greater representation for insurers and financial advisers on government regulatory bodies.

He stressed that the lack of influence on organisations such as the Financial Services Commission has negatively impacted his members.

“The Government, on a whole, our infrastructure, is not set up in a way to better facilitate how we work. So we are a side-off type of business, and we are not treated as true businesses and given any extra help in any way to keep things functioning,” he told The Gleaner.