Labels Cabinet reshuffle as ‘a sham’ 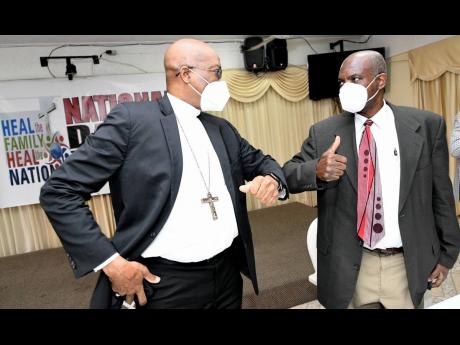 Bailey, in a statement issued on Saturday, slammed Prime Minister Andrew Holness’ Cabinet reshuffle as “a sham” and accused the head of government of making a “mockery of the process”.

“If he refuses to resign, the prime minister should relieve him of his duties in the interest of the safety and security of the Jamaican people,” the clergyman demanded.

Murders soared in 2021 by 10 per cent and the killings have drawn outrage this year, with an average of five homicides every day up to last Thursday. More than 60 people have been murdered so far this year.

Bailey’s call came against the background of a string of double murders last week, as well as the slaying of nine-year-old Gabriel King in St James on Thursday.

Despite the murder wave, Chang, also the deputy prime minister and general secretary of the Jamaica Labour Party, was recently reinstalled as national security minister.

“Under Dr Chang’s watch, crime and violence islandwide has reached alarming proportions and shows no sign of abatement. The violent, frightening and brutal nature of the killings reflect wanton disregard for law, order and the efforts of his administration. So, he must take responsibility for the ineffectiveness and incompetence of his leadership,” said Bailey, who delivered the sermon during the recent National Day of Prayer at which Holness cried and lamented the killing spree.

“It is clear that Jamaicans have lost confidence in the minister of national security. It is also clear that he is unable to earn the support and confidence of Jamaicans in the fight against crime, which is an important component,” the clergyman lamented.

But the prime minister yesterday expressed full confidence in Chang as he defended his decision reinstall him as the national security minister.

Addressing a press conference at Jamaica House, Holness said: “I asked Dr Chang to take over the portfolio of national security before the last election. It is the most difficult portfolio in the country. It requires a long-term commitment to the plans that we have in place…[and] we are not going to change the current situation through the flip of a switch,” Holness said in reference to the leadership of the national security ministry.

“The problems are deep-rooted and they require significant structural, institutional, cultural and resource reform. These take time particularly the legislative, particularly the policy and the structure,” he added.

The bishop, who is also vice-president of the Jamaica Evangelical Alliance, has also questioned the competence of Police Commissioner Antony Anderson.

“Where is his strategy to cauterise crime? While the nation waits, there is unrest and demotivation among the rank and file of the JCF (Jamaica Constabulary Force) on the matter of promotions and emoluments, but the only talk is about the need for more resources for the JCF to be effective.