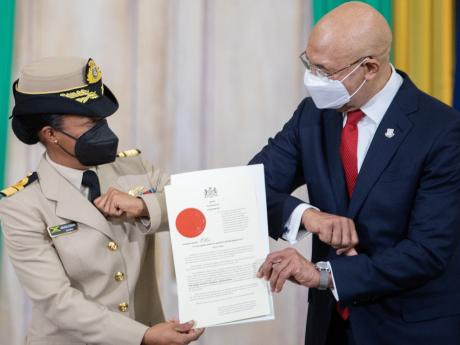 Those were the words of Rear Admiral Antonette Wemyss-Gorman shortly after she was sworn in as Jamaica's first woman Chief of Defence Staff by Governor General Sir Patrick Allen, at King's House today.

She succeeds Lieutenant General Rocky Meade who has retired after 38 years in the army.

The new army chief has committed to providing decisive, firm and strategic leadership.

“Over the past 29 years of service to the force, I have acquired valuable tools and honed the skills required to prepare me for this job. I must recognise and thank all the former chiefs who have all played significant roles in my development,” said Wemyss-Gorman.

She said it is a reality that the Jamaica Defence Force (JDF) will continue to play a critical role in the country's national security apparatus and her efforts will be anchored in the five pillars of force transformation - capability development, human resource management, infrastructure, command and control.

Wemyss-Gorman explained that this will ensure that the force is fit for purpose and capable of effectively confronting current and future threats to Jamaica's security.

Meanwhile, the governor general said Wemyss-Gorman is no stranger to challenges.

“Your track record, your history of firsts and trailblazing career, to date, speak to your suitability for this post. I am confident that as you build on the foundation of your predecessors, you will continue to serve with distinction,” said Allen.

Wemyss-Gorman's appointment as a woman chief of defence staff is also a first for the English-speaking Caribbean and the Commonwealth.

Prime minister Andrew Holness echoed similar sentiments about Wemyss-Gorman's pioneering efforts in the military, noting that she possesses the combination of leadership skills, experience, commitment and strategic vision to lead the JDF.

Holness said he is looking forward to benefiting from her wise counsel on matters related to defence and security.

“The rear admiral's many years in the JDF coast guard has allowed her to treat significantly with issues related to maritime security and the blue economy. She will therefore bring a unique perspective to our discussions and our efforts to strengthen our borders and prevent illicit inflows,” Holness explained.

The prime minister added that Wemyss-Gorman's expertise will also help with the protection of the lives and livelihoods of coastal communities and ensure that Jamaica can gain sustainable benefit from its maritime resources.

Meanwhile, Holness said as a small country Jamaica must continue to employ all available resources to address the number one threat to the country's collective future - crime.

“I am confident that under Rear Admiral Wemyss-Gorman's leadership, the JDF will continue to grow from strength to strength. It will also continue along its path of transformation and capacity development, as it positions itself to more effectively and efficiently combat current and future threats impacting Jamaica,” Holness remarked.

Both Allen and Holness commended outgoing chief of defence staff, Lieutenant General Rocky Meade, for his five years of service at the helm of the army and the foundation he has laid for Wemyss-Gorman.