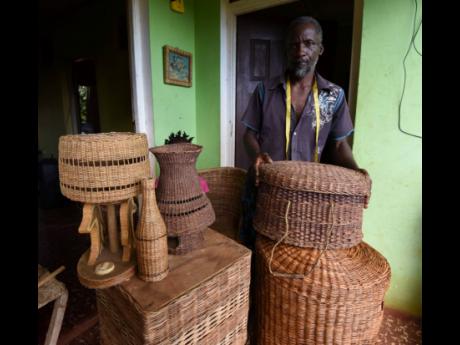 Ian Allen
Ian Allen/Photographer Devon James, of Point Hill in St Catherine, shows off some of the craft items he makes using wicker. 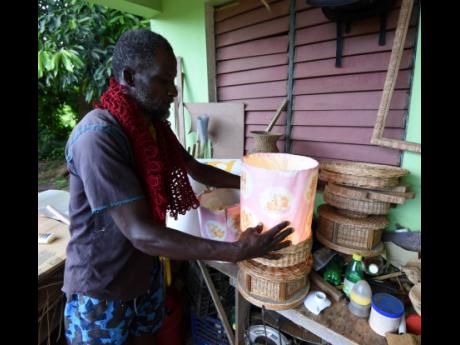 He has fashioned bedside table lamps, chairs, hassocks, picnic baskets, mirror frames, vases, clothing baskets, and picture frames, which takes him at least three days to complete, depending on the product.

James, a protégé of wicker specialist Lester Davis in the early ‘90s, told The Gleaner that after 30 years of working odd jobs, including sweeping and masonry, he decided to master the skill.

While spending some time in Hanover, the 50-year-old began to pass on his wisdom, instructing primary-school youngsters on how to master the trade while continuing their academic studies.

He also taught students at Point Hill Junior High School and the youth in the Kitson Town community, as he believes that acquiring a skill was important as one should not rely on academic achievements alone.

“Because me see the benefit in doing it, so I guess it would be useful for others having it,” he said of his reasoning for deciding to volunteer his time.

After seeing her father devote hours of his love to his works of art, his five-year-old daughter has shown an interest in the field as she, too, would often try to help him with his creations.

Her father is indeed very proud of the wicker technique, which has sparked her interest and captivated her desire in crafting her own products.

As such, in a display of cardboard cut-outs with outlines in the shape of a butterfly and other objects or animals, James has provided a starter-kit of sorts for his daughter to get her accustomed to following along the lines of different shapes as she uses small pieces of paper and paste them along the lines.

“She do it herself, without any supervision, me just draw it and give it to her. Me focus on my work, she focus on [her work],” he explained.

“Every aspect of it she try to gravitate to it,” he added proudly, revealing that when she is not at school, she spends time with him at his work station situated on the verandah of their home.

The father-daughter duo has been inseparable since.

James stressed the need for acquiring a skill by young people who lack academic smarts. He emphasised that learning a craft is not restricted to this particular group of youth, as he advised that everyone should have a back-up plan. This is in the event that unforeseen circumstances arise, such as when the work place closes down or undertakes a redundancy exercise.

“Some of the skills are so simple and a lot of them have the ability,” he said, noting that some are just lacking in ideas of how to execute their talent.

As a result, he recommends that the younger generation should go out and watch various markets in order to identify any unmet desires in such areas and thereafter ‘set up shop’ to cater to the sector and service individuals who are in need.

James has also developed an interest in fashion jewellery design, which began after a bracelet he was wearing broke one evening. He then made earrings out of the parts from the five-piece bracelet, which a lady in the community found quite alluring.

From that day, he experimented with crafting more jewellery, mostly at a spur of the moment, using fishing line embellished with beads or sea shells.

“Whatever come in, I just put it out with my fingers,” he said of the ideas that would occasionally arise or the avenues he has found to be lucrative.

James is known to express his creative ideas as they arise, he has capitalised on to master his wicker techniques.