BBC’s Clive Myrie in the heart of the war zone 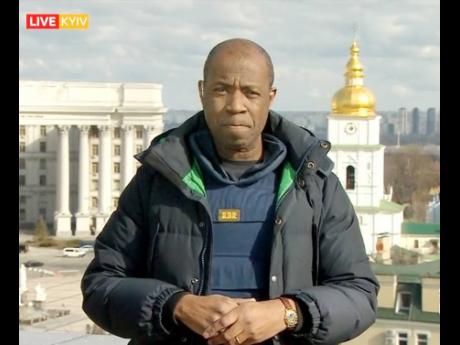 Contributed
BBC News at Ten presenter Clive Myrie as he reports from the Ukraine capital.

Amid the blanket television news coverage of the Russian invasion of Ukraine, among the most riveting has been Clive Myrie’s live reports from the capital Kyiv on the BBC News at Ten.

Each night, Myrie brings the harsh reality of the war zone into sharp focus as he dons flak jacket and reports on the day’s developments while explosions from missile strikes or the crack of gunfire echo in the background.

But this is nothing new for the senior BBC news reporter, as he has travelled to more than 80 countries as a foreign correspondent since 1996 covering conflicts in such places as Afghanistan and Iraq and now Ukraine.

In a recent interview with the Big Issue magazine, Myrie, who was born in Bolton to Jamaican parents, said there will always be an adrenalin rush reporting from dangerous places, but for him it was not about the danger but about “telling stories from incredible places”.

YOU COULD BE THE ONE

He said: “It’s interesting talking to soldiers and to those who do go into battle. You never ever think, really consciously, that you’re going to be the one who gets shot or blown up or killed. Something has to present itself to you that make it clear that you could be the one.

“So, for instance, when I was embedded with the Royal Marines going into Iraq in 2003, we all had to write goodbye letters to our families, a sort of last will and testament I suppose. Just in case we didn’t come back.

“That process, saying goodbye in letter form, does remind you that you might not get back.”

Many BBC viewers have praised the way Myrie has delivered his reports on the Russian invasion last week. In one of his reports, he talks about the fact that he has to sleep in the underground shelter at nights with hundreds of people as the threat of aerial bombardment looms.

One person tweeted: “Clive Myrie is one of my heroes. He sees what is really happening and shares it with the rest of us in an honest and compassionate way.”

Another said: Clive Myrie has really solidified his status as a national treasure with his reporting from Kyiv. He’s one of best broadcasters.”

Myrie was born in Bolton, Lancashire, to Jamaican parents Norris and Lynne Myrie, who came to England in the 1960s. He was educated at Hayward Grammar School in Bolton before he graduated from the University of Sussex with a bachelor of law degree in 1985.

He first joined the BBC in 1987 as a trainee local radio reporter on the corporation’s graduate journalism programme, where his first assignment was a reporter for Radio Bristol. He moved to other stations within the corporation before he became a foreign correspondent in 1996.

Between the years 1997 to 1999, he was posted in Tokyo and then Los Angeles, before he eventually became BBC Asia correspondent in 2002. He went on to become Paris correspondent from 2006 to 2007 and his major assignments since include coverage of the impeachment of US President Bill Clinton and wars in Kosovo, Afghanistan and Iraq.

In April 2009, Myrie was appointed a presenter on BBC News Channel, which brought him alongside some of the big-name presenters, including Huw Edwards and Fiona Bruce. In 2019, he began presenting BBC News at Six and BBC News at Ten on the national network.

More recently in August 2021, he replaced John Humphry as the new host of the flagship BBC Two quiz show, Mastermind, the first black presenter to do so in its 49-year history.

Last week, however, he swapped the quiz chair and the news studio to present News at Ten from a high-rise building in the centre of Kyiv, the Ukraine capital.

In one of his reports, he told viewers: ”We heard the air raid sirens and we have put on our flak jackets.

“One wonders what the people of this city and, indeed, right across this country are now thinking. They prayed for peace and with all the diplomacy over the last few weeks and months, they hoped that would be the case.

“Now, we are in a major conflict.”