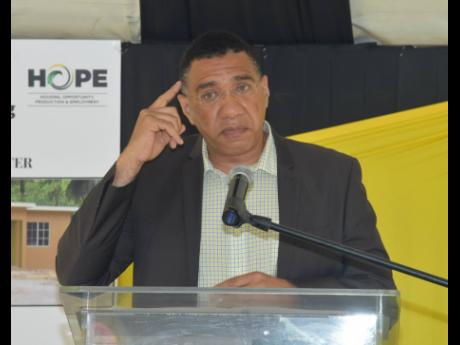 Ashley Anguin/Photographer
Prime Minister Andrew Holness gestures during an address at the handover of a newly constructed house in Latium, St James, on Friday, May 20.

PRIME MINISTER Andrew Holness has said Jamaica is short of adequate and highly trained contractors to effectively handle the scope of work required to build out the country’s infrastructure.

Holness made that remark 0n Friday during a ceremony to hand over a two-bedroom house under the state-run Social Housing Programme in Latium, St James.

“We need to develop our contractor corps in the country. We just don’t have enough good and technically capable and competent contractors for the number of projects that are going on. It’s just the case,” Holness said.

“I know some of my friends are going to be upset, but it is the truth,” the prime minister insisted.

According to Holness, the country is badly in need of properly trained contractors with greater expertise.

The prime minister doubled down on comments he made in April at the groundbreaking for the 700-room RIU Aquarelle in Coopers Pen, Trelawny, where he said that Jamaica could be forced to import skilled workers for the construction industry.

He said back then that more workers were needed to build out seven major developments on the horizon along the north coast.

At the same time, the prime minister also emphasised the need to remove contractors whose record of substandard work besmirched the image of their own colleagues as well as the Government’s.

He said he has tasked the Procurement Commission with developing a cadre of suitably qualified contractors from which the Government can confidently select and award contracts.

“Work is going on, but it has to be properly managed, so we want to have a contractor corps who embrace technology, embrace best practices, they are performance-oriented, and they have a modern outlook,” Holness said of the calibre of contractors the country needs to have.

“So they are not in there to make money, scrape the margin and go. They must actually take pride in the work that they do.”