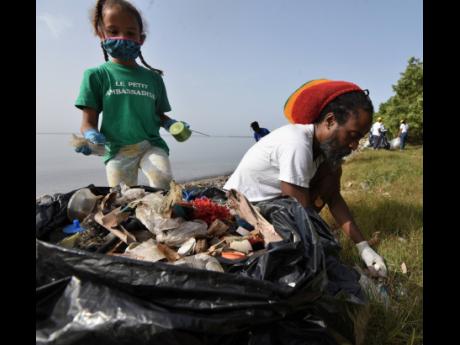 Ian Allen/Photographer
Habte Selassie Brown and his daughter Aya help clear plastic bottles and other debris from Sirgany Beach in east Kingston during a clean-up drive on Saturday. Aya, who is six years old, is a member of an environmental club at Liberty Learning Centre in Tower Isle, St Mary. 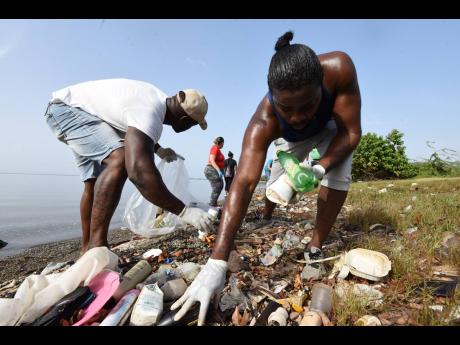 Ian Allen/Photographer
Volunteers from Jamaica National Group turn out at Sirgany Beach in east Kingston to clear the coastline of garbage for a pre-Labour Day project.
1
2

Six-year-old Aya Brown and her father journeyed from St Mary to Sirgany Beach in east Kingston for the Jamaica National Group - Earth Ambassadeurs beach clean-up on Saturday, two days ahead of Labour Day.

Young Brown told The Gleaner that her environmental club teacher at Liberty Learning Centre in Tower Isle told her about the event and she could not afford to miss it.

“The environment is very important to me. I love my environment. I picked up bottle caps, plastic wrappers, sponge, and plastic bottles. I played my part to keep the environment clean and healthy,” she said.

Her father, Habte Selassie Brown, said he has always been supportive of his daughter’s dedication to the environment and left home before 6 a.m. in order to arrive on time.

“When I see people throw garbage through their car window, it hurts me, because they don’t litter in their homes like that. When you look at the beach right now, there are more bottle caps than sand. It’s a terrible situation,” Brown said, calling for aggressive action.

Earth Ambassadeurs was founded a year ago out of concern for the marine environment and the need to create a community for Jamaican youths to exercise their environmental stewardship.

Director Dr Andrea Clayton said their intent is not only to host beach clean-ups, but also to foster behavioural change.

“Today we are separating the traditional trash from the plastic bottles, and MPM Waste Management has committed to come and collect the trash, and Recycling Partners, the bottles,” she said, adding that data were also being collected.

Clayton said data are critical to assessing the composition of the garbage removed and for planning future clean-ups.

“We are looking to see at what time of the year there is more garbage at a specific location. The majority of the garbage comes from inland, but there’s also the tide that we have to consider, as waste is also deposited on our shores from elsewhere,” the Caribbean Maritime University faculty member added.

JN ambassador, dancehall entertainer Agent Sasco, and Matthew Samuda, minister with responsibility for environmental affairs, were among the scores of volunteers at the beach clean-up.

Agent Sasco, whose given name is Jeffrey Campbell, told The Gleaner that he is passionate about the environment and its sustainability.

“Whenever the opportunity presents itself to bring some awareness and get some work done in that space, it’s always welcome,” he said.

Samuda and his son joined the clean-up after leaving another at the Rae Town Fishing Beach.

“It is important that when citizens exude the spirit of volunteerism, their commitment to sustainability and to environmental protection, that we as government officials encourage it and participate. There is no greater example,” the minister said.

“The JN brand has always been focused on environmental consciousness. Throughout this year, we want to lead on environmental initiatives through Eco Champs, focusing on waste management, specifically as it relates to recycling, and, also, we want to encourage persons and bring awareness to reforestation,” Spencer said.

She said that in partnership with the Forestry Department, trees will be distributed across its locations as it aims to plant at least 4,300 over one year.

“We are stewards of the environment, and we want to preserve Jamaica for Jamaicans,” Spencer added.