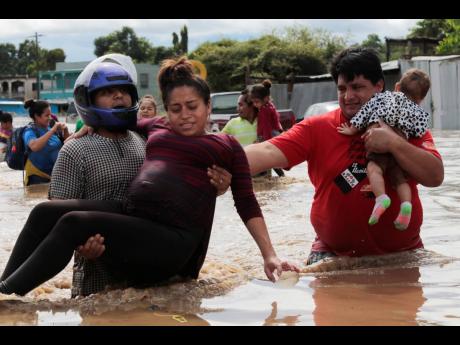 AP
A pregnant woman is carried out of an area flooded by water brought by Hurricane Eta in Planeta, Honduras, where thousands of homes were damaged in November 2020.

THE ALLIANCE of Small Island States (AOSIS) is insistent that developed countries should respond positively to the call for dedicated financing for small island developing states (SIDS) in readiness for the anticipated ravages of a changing climate.

“A just transition should and can be accelerated, if only developed countries commit to leading with integrity. They must honour their pledges, such as the US$100 billion per year for climate finance – a figure they have not met, while spending five times the amount on fossil fuel subsidies,” noted Ambassador Walton Webson, chair of AOSIS, which has represented the interests of 39 small island and low-lying coastal developing states in international climate change and sustainable development negotiations since 1990.

“The global architecture to address climate change is failing SIDS. It is critical that we implement an equitable system where vulnerable populations and smaller economies no longer pay the price for the destructive emissions of the developed world,” he added in a June 6 release to the media.

AOSIS’s renewed call comes as the subsidiary bodies of the United Nations Framework Convention on Climate Change (UNFCCC) meet in Bonn to prepare for the upcoming climate change negotiations (27th Conference of the Parties [COP] to the UNFCCC), set for this November.

“… AOSIS firmly believes that this year’s Glasgow Dialogue should lead to the conclusion that a new Loss and Damage Finance Facility is necessary and will be adopted at this year’s COP, so that the future Glasgow Dialogues to 2024 can operationalise the facility,” said Ambassador Conrod Hunte, lead climate negotiator for AOSIS, at the opening of the Bonn session.

The Glasgow Dialogue was set up between parties and stakeholders at the climate talks (COP26) held in Scotland last year to discuss funding arrangements for activities to “avert, minimise and address loss and damage associated with the adverse impacts of climate change”.

“We reiterate that position here today, and signal our position for an agenda item on funding arrangements at COP27 and CMA 4 (Conference of the Parties serving as the Meeting of the Parties to the Paris Agreement) to facilitate this becoming a reality,” Hunte added.

Meanwhile, AOSIS has revealed that as negotiations intensified at COP26 last year, they were leading the effort for countries to create a concrete loss and damage financing facility in what it described as “a transformative move that would have given SIDS the opportunity to recover from climate disasters without onerous debt burdens”.

“However, in the interest of coming to an agreement to limit global warming to 1.5 degrees Celsius, AOSIS made a significant concession after being given a take-it-or-leave deal for the creation of the ‘Glasgow Dialogue’... Though dissatisfied with the final text of the Glasgow Dialogue, AOSIS is committed to participate constructively in the dialogue … through to a clear destination of real action to safeguard SIDS threatened by climate impacts,” AOSIS said in the release.

AOSIS has also called for “revised and strengthened Nationally Determined Contributions (NDCs) or country targets, by September from the G20 major emitters, where countries take accountability and necessary action to halve emissions within this decade”.

NDCs reflect individual country contributions to the reduction of greenhouse gases, which fuel climate change impacts – from the warming of the planet to the associated sea level rise and extreme weather events, including hurricanes, the likes of which have pummelled a number of Caribbean islands over recent years.