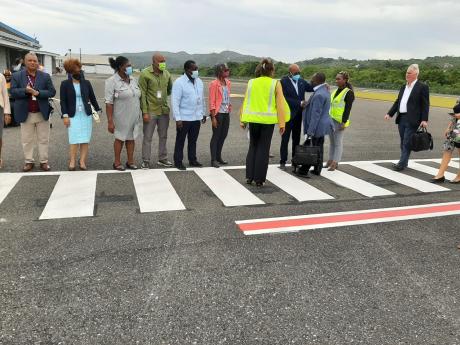 The airline is scheduled to operate monthly flights but is expected to transition to weekly service later on. -Carl Gilchrist photo.

The airport today saw the arrival of InterCaribbean Airways from Providenciales, Turks and Caicos.

Minister of Tourism Ed Bartlett was among government officials and stakeholders to welcome the passengers and crew.

The airline is scheduled to operate monthly flights but is expected to transition to weekly service later on.

At the time of the announcing plans for international flights at Ian Fleming last December, the Transport Ministry indicated that the move forms part of the efforts of the Airports Authority of Jamaica to increase traffic in and out of the island's smallest international airport, pumping in excess of US$2 million into the Jamaican economy.

“This development is particularly important because the largest single employer in the Turks and Caicos Islands is Sandals Resorts, the largest Jamaican-owned luxury all-inclusive resort, with approximately 600 Jamaicans directly employed there and an estimated 6000 Jamaicans and descendants living in the island,” said then Portfolio Minister Robert Montague.

Noting the limitations regarding the size of planes that can fly in and out of the airport, it was said that InterCaribbean Airways would offer 30-seater planes.