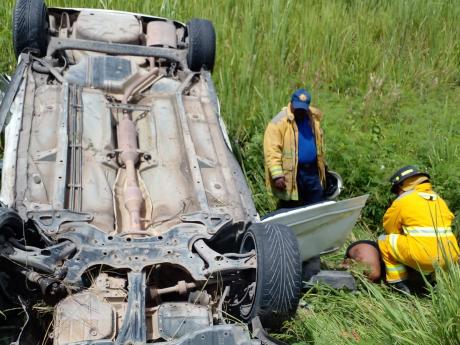 A mother and her child were among four persons who were injured in a two-vehicle crash along the Spring Gardens Main Road in St James this morning.

The injuries sustained by the mother and child are said to be serious.

They are now hospitalised.

The police report that shortly after 9 o'clock the woman and her child were travelling in a white Toyota motor car being driven by her boyfriend from the direction of Sandy Bay in Hanover.

On reaching a section of the Spring Gardens Main Road, he reportedly attempted to overtake a line of traffic and collided with a Toyota pickup truck which was travelling from the direction of Montego Bay towards Negril.

The impact caused the motor car to flip over and land on its roof in bushes while the truck crashed into a ditch.

Both vehicles were extensively damaged.

The mother and child, who sustained serious injuries, were rushed to the Cornwall Regional Hospital.

The woman's boyfriend and the driver of the pickup truck escaped with minor injuries.