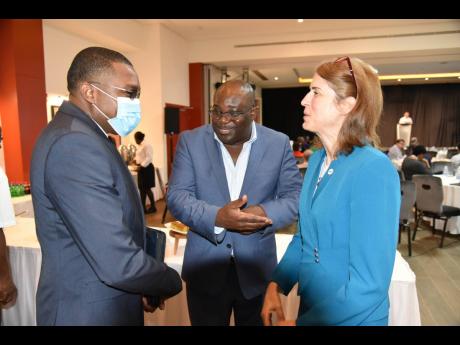 Photo by Herbert McKenis
Robert Morgan (left), the de facto minister of information, chats with Madeleine Noland (right), president of the Advanced Television Systems Committee, and Cordell Green, executive director of the Broadcasting Commission, during the opening session of the ATSC 3.0 Boot Camp and Seminar at the Ocean Coral Spring Resort in Trelawny on Tuesday.

BROADCASTING COMMISSION Executive Director Cordel Green is resolute that with Jamaica’s switchover to ATSC 3.0 television transmission earlier this year, analogue must completely give way to digital by 2023.

Speaking to journalists on Tuesday during the opening session of the Advanced Television Systems Committee’s ATSC 3.0 Boot Camp and seminar at the Ocean Coral Spring Resort in Trelawny, Green said that the transformation from analogue to digital will have financial and environmental benefits.

“The idea is that we definitely will have a switch-off date (for analogue television) like every country in the world, and the plan now is to switch off in 2023. The earlier you manage the switch-off, the better, because until you switch off, you are doing simulcasting, which is expensive, as it is not good for the environment and it is not good for business,” Green said.

“You are using up electricity and resources to run two transmissions.”

The ATSC 3.0, also known as NextGenTV, is a major overhaul to the Advanced Television Systems Committee’s standard for sending and receiving over-the-air signals since the group first introduced ATSC 1.0 in 1996. Its features include 4K and HDR picture resolutions, along with advanced Dolby audio.

Jamaica, which followed the United States and South Korea in implementing the new technology, has to date launched two transmitter sites for ATSC 3.0, one at Television Jamaica’s Lyndhurst Road location in St Andrew in January and the other at Flower Hill in Montego Bay, St James, earlier this month.

Green noted that while mitigation measures will be in place to ensure ATSC 3.0’s successful implementation over time, local broadcasters will have a role to play in that endeavour.

“A lot will depend on the Jamaican people as well, how quickly they have the receivers for the new signals, and it will also depend on the broadcasters and their roll-out. Then you have to manage some risks, such as the impact of the Russia-Ukraine war on the supply chain,” said Green.

She said that ATSC 3.0 has great potential to underpin the foundation of strong businesses.

“The system is the state of the art in the world, and it holds the position as the most efficient digital data transmission system, bar none. What you are doing and continue to do to develop, deploy, and promote ATSC 3.0 shows your commitment to your own future successes,” said Noland.