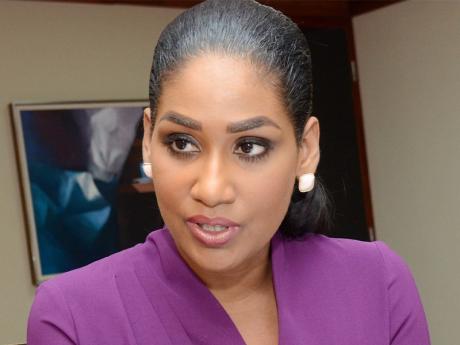 Hanna: "I have many times stood alone on principle, which was perceived as unreasonable and misunderstood."

People's National Party (PNP) MP Lisa Hanna says she is leaving representational politics "to pave new roads for the generation coming behind us".

Hanna advised party president Mark Golding on Tuesday that she will not offer herself as a candidate for the PNP in the next general election, according to a statement from the 46-year-old whose birthday is in 11 days.

Hanna currently represents St Ann South East in the House of Representatives, a seat she has held since 2007.

She came in for criticisms following her narrow win in the PNP bastion in the 2020 general election in which her party was battered by the governing Jamaica Labour Party.

That year she also lost a bid for the PNP presidency.

The former Miss World has consistently polled as one of the most popular politicians in Jamaica.

"It has not always been easy; the political baptisms of fire were often unrelenting and excruciating. I have many times stood alone on principle, which was perceived as unreasonable and misunderstood" she said in her August 9-letter to Golding

Hanna served as a Minister of Youth and Culture in the Portia Simpson Miller administration of 2012-2016.

She is currently the PNP's spokesperson on foreign affairs.

I have always been a champion of change and having the courage to do what's right even when it's not expedient or self-serving, as I believe courage has an obligation to pave new roads for the generation coming behind us. As such, I have recently decided to conclude my current journey in representational politics at the end of this term.

Therefore, I will not be offering myself as the Party's candidate in the next general election when it is called, a decision I have communicated to my constituency executive. I trust this early notice will give constituency delegates adequate time to go through a selection process to select a candidate of their choice, which is their constitutional right. I remain available to serve at your consideration in the Shadow Cabinet as Spokesperson on Foreign Affairs and Foreign Trade.

In 2007, Comrade Portia Simpson Miller formally invited me to join the People's National Party and be its standard bearer in South East St. Ann in the then upcoming General elections, a move that changed my life immensely as it allowed me to serve my country in another capacity.

Over the last fifteen years, I have found this experience quite satisfying; it allowed me the privilege to serve as an elected Member of Parliament, Cabinet Minister, on the national scene, and at the Party level as Regional Chairman and Treasurer. This opportunity will always be a part of me as it reshaped the foundations of my thinking and will forever guide my perspective.

The PNP has always believed in equal opportunity for all regardless of station in life. This fundamental philosophy has driven our actions to propel solutions for national prosperity through building the economic base of Jamaica from the bottom up. We have always been the Party with a heart, the people's Party that is in touch with the grassroots and committed to ensuring no Jamaican is left behind.

However, for any organization to survive and be relevant to successive global environments and markets, it must be responsive and change with the times, seeking modern approaches to getting things done. This does not mean changing our core principles, mission, or value proposition but rather, embracing modern communication, applying our principles to 21st-century challenges, empowering the next generation, and, most importantly, attracting and retaining the right talents to get the job done.

I  have no doubt, Party Leader, that once the PNP can recalibrate its approaches to reignite and reinforce these core tenets within the minds and hearts of Jamaicans to inspire their imagination and aspire towards a better future, our Party will form the next government.

My sincere appreciation to my constituency executive, constituency office staff over the years, my SESA campaign teams, managers, election workers, group members, and of course, to the people of SESA who entrusted me to represent them in Parliament for four terms. I made a commitment to represent you and will continue to serve you with grace and fervor through the conclusion of my term. And finally, thank you to my parliamentary colleagues, the many friends I met along this inspirational journey, especially my dearest friend Natalie Neita-Garvey, my gratitude to you always.

It has not always been easy; the political baptisms of fire were often unrelenting and excruciating. I have many times stood alone on principle, which was perceived as unreasonable and misunderstood. But on the whole, the collective experience has bolstered my character, sharpened my fighting skills, and prepared me well for the next chapter of my life's journey.

I am, and will always remain grateful to the PNP, and wish you the very best as you lead the movement towards victory at the polls and the formation of the next government.