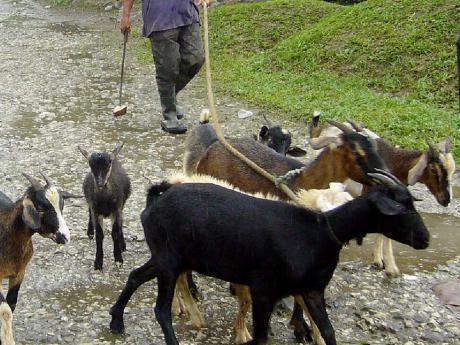 The residents say the threat of bad weather from Tropical Storm Ian could not compare to the damage to their lives caused by praedial thieves. - File photo.

Goat farmers in Bushy Park, Lloyds Pen, St Catherine are appealing to the authorities to do more to clamp down on praedial thieves who continue to plague the community.

"My God ! The biggest problem down here is goat thieves who are armed and dangerous," said farmer Anthony Bernard.

“Yes I have used some pallets to nail up di pen, [but] not even di storm [Tropical Storm Ian] could hurt mi like di $2,000,000 [in] losses I suffered after losing 40 goats dat dem tek from me at gunpoint," Bernard lamented.

He is among others in the community where poultry, small ruminant and cash crop farming is a way of life.

"I do believe that this road is one of the most dangerous in St Catherine," a resident Maria Belnavis said.

"I know that the storm Ian was worrying and we appreciate the good news, but the goat thieves really need to be dealt with urgently," she said.

They bemoaned that the threat of bad weather from Ian could not compare to the damage to their lives caused by praedial thieves.

According to the residents, the thieves typically travel to the area, hold up farmers at gunpoint and then leave with their livestock in their vehicles.

"We think that an effort must be made to arm farmers to protect their properties as by police come they escape and we continue to suffer," said contractor Vaugh Williamson.

The police said they continue to act on reports of farm theft in the community.