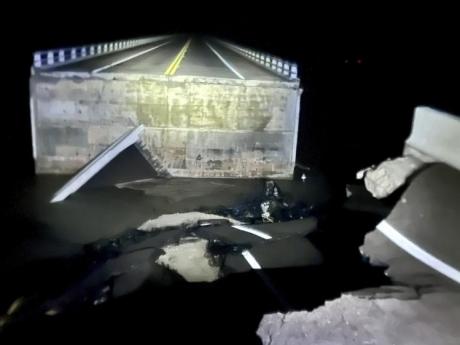 A section of the causeway leading to Sanibel, Fla., in Lee County was knocked out by Hurricane Ian Thursday, September 29, 2022. Hurricane Ian has left a path of destruction in southwest Florida, trapping people in flooded homes, damaging the roof of a hospital intensive care unit and knocking out power to 2.5 million people. (Douglas R. Clifford/Tampa Bay Times via AP)

Jamaicans living across the state of Florida in the US have pulled through Hurricane Ian mainly intact, with no major property damage or loss of life reported.

Jamaica's Consul General in Miami, Oliver Mair, told The Gleaner Thursday morning that all initial reports to him and his staff are that Jamaicans mainly came through the hurricane unscathed.

“There have been reports of flooding, loss of power, but so far we are not hearing of any major damage or loss of lives,” he said.

Mair said that he has been in contact with many Jamaicans and Jamaican organisations across the state.

“I am continuing to monitor the situation and will have further updates as the day progresses,” he said.

He further stated that the consulate offices in Miami, which were closed yesterday, will reopen for business today.

Hurricane Ian, packing winds of up to 155 miles per hour, slammed into the west coast of Florida Wednesday afternoon dumping tons of water on places like Fort Myers and Naples before moving across to central Florida, inundating Orlando and Tampa.

However, both Tampa and Orlando were spared direct hits.

Many lost power and there were strong storm surges but, for the most part, property damage was not as extensive as initially expected.

Evie Larmond, president of the Caribbean Community Association and a Tampa resident, said that she has had no reports so far of extensive property damage in the Tampa area.

She said that she is continuing to monitor the situation and will have an update later today after speaking with the various organisations in and around central Florida.

“But, so far, I have not heard of any loss of lives among Jamaicans or any major property damage. Many lost power and there has been flooding, but I am unable to say right now what is the extent of the damage,” she told The Gleaner.

“We had rain and wind and some flooding but no damage to property,” he said.

Cunningham said that his backyard was like a lake, but his home was not damaged.

Reverend Dr. Karen Green, the democratic nominee for congressional district 7 in the upcoming November mid-term elections and a resident of Orlando reported no damage to her property although there was flooding in the area. She also reported no loss of power.

In a statement issued ahead of the hurricane she urged residents to heed all warnings and advice from officials and to shelter in place.