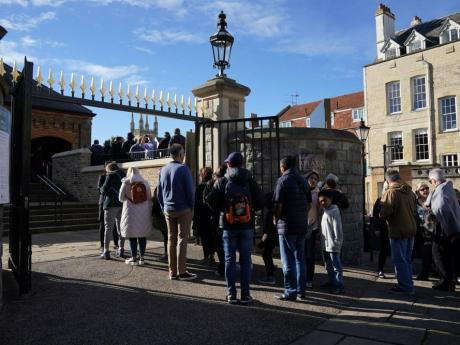 People queue outside as Windsor Castle and St George's Chapel, which is reopened to public for first time since Queen Elizabeth II's death, in Windsor, England, Thursday, September 29, 2022. (Jonathan Brady/PA via AP)

The certificate, published by the National Records of Scotland on Thursday, records that Elizabeth died at Balmoral Castle in Ballater, Scotland, on September 8 at 3:10 p.m.

The document was signed by the queen's daughter, Princess Anne.

Hundreds of royal fans lined up outside Windsor Castle for the chance to pay their final respects to Queen Elizabeth II as the chapel where the late monarch was buried opened to the public Thursday for the first time since her death.

Many want to visit the tomb of Britain's longest-reigning monarch. It is marked by a slab of hand-carved Belgian black marble inside the King George VI Memorial Chapel, part of St George's Chapel at Windsor Castle.

The queen's name is inscribed on the ledger stone in brass letter inlays, alongside the names of her husband, mother and father.

To visit the chapel, royal fans have to buy a ticket to Windsor Castle. The price for adults is 26.50 pounds ($28.75) Sunday through Friday, and 28.50 pounds on Saturdays.

The memorial chapel sits within the walls of St George's Chapel, where many members of the royal family are buried. It has also been the venue for several royal weddings, including the marriage of Prince Harry to the former Meghan Markle in 2018.