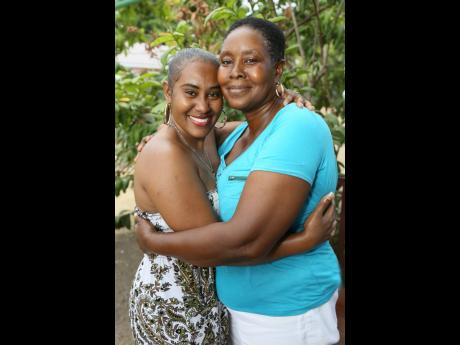 Nathaniel Stewart
Nathalee Frank shares a warm embrace with her mother, Sheron Howell, whose love of children has influenced her decision to become an early childhood educator.

FOR 26 years, 52-year-old janitor Sheron Howell has been caring for children at the Alley Infant School in southern Clarendon.

As she shared the attributes of her job with The Gleaner, the animated expression on her face evidenced the love and dedication she has for the role.

Howell said that she enjoys being around children, as they keep her going.

“I like to play with them, I like to carry (sic) them to the bathroom and see that they wash their hands. They love to come and hug me and make much of me. I am happy too, cause I just love them, they give me a warm feeling,” she gushed.

During the height of the pandemic, she explained that she had to be extra vigilant in ensuring that her ‘babies’ were safe, as she ensured they washed their hands and wore their masks even when they didn’t want to.

“It is a job and it is a love. Anything they are doing, I love to help them and look around and see that they are alright. Caring for them is natural for me,” she stated.

A single mother raising five children of her own during the early days of her employ, Howell said she knew how to ‘juggle’ to make things work. She said her children would come over from the neighbouring Alley Primary School to wait on her to complete her duties before they headed home for the day.

As they grew older, she said they would stay with her now-deceased father until she got home.

Howell said she has no thought of retiring, especially now that all her children are grown, with the youngest being 18 years old.

Nathalee Frank, 33, said watching her mother as a child taking care of her four siblings and the children at school had a great impact on her.

“I really admire my mother, she is a strong black Jamaican woman. I see her as a real mother not just to all of us, but to other children in the community during my time in high school, which is the Denbigh High School in May Pen. I think about being a teacher as well as a caregiver,” Frank shared.

It was that admiration that influenced her to join the Foundation Preparatory School at age 17, as a National Youth Service worker. After doing about six months under the programme, she remained at the school for about two years.

“After working with kids and sharing and receiving their love, I left and went to the SOS Children’s Village in St Andrew. I love to work with kids and, gaining all the knowledge and experience from my mother, it gave me a great impact on my life,” Frank stressed.

Wanting to be more proficient at her job, Frank said she placed adverts in The Gleaner offering her services as a caregiver. Smiling, she said she got a number of offers, allowing her to gain experience outside of the school setting.

After nine years at another prep school, Frank is now into private tutoring of children, as, just like her mother, her life is centred around children.