Over 50 students get millions in scholarships 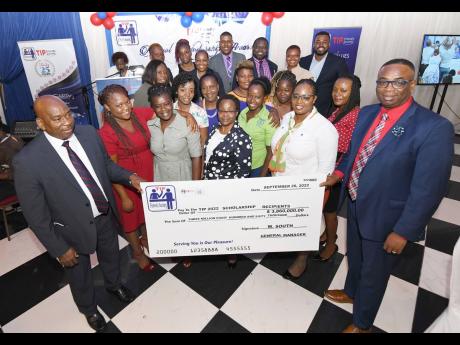 Guests at the TIP Friendly Society’s scholarship awards ceremony held Monday, September 26 at the Terra Nova were held spellbound by keynote speaker Jezeel Martin’s ‘rags to riches’ story as he encouraged the group of over 50 student awardees to persevere to success, despite their circumstances..

To mark its silver anniversary, TIP Friendly Society – the friendly society for employees in the education sector contributed $3.86 million in scholarships to 54 students for the current school term. In addition, a member of the friendly society, Fabian Wainwright, education officer at the Ministry of Education, was the successful recipient of the TIP President’s 25th anniversary scholarship award in the amount of $200,000. The scholarship awardees included: 28 top boys and top girls in the PEP examinations per parish; five children of staff members; six repeat PEP awardees; seven undergraduates, six postgraduate students and two education grants.

Addressing the awardees, Martin, an associate at Myers, Fletcher & Gordon, shared that there were times when he lacked money and food as a student from August Town, St Andrew, attending St George’s College.

“I am telling you my personal story, not to brag and boast, but I want you to know that although your circumstances can be challenging now, you must remain focused and not yield to distractions, because you can be whatever you want to be no matter where you come from,” Martin said.

“But my mother taught me to put on a brave face and not tell people my business,” he said to nods of agreement from the adults in the audience. To illustrate the point that when in such circumstances persons have to do what they have do to survive, he spoke about cleaning houses for the upper echelon where he was paid premium rates, because of his diligence to the job.

Martin said his movement up the education ladder was only possible through the altruism of several persons, who covered his school fees, books, transport and lunch. He benefited from these contributions right up to tertiary level of studies at The University of the West Indies and then Norman Manley Law School.

“About three months before I graduated from law school, two of the most prestigious law firms in Jamaica offered me jobs and I took the one at Myers, Fletcher & Gordon,” he related.

He is now serving five years with that prestigious law firm; having worked on some major transactions, including a US$2-billion deal. At 26 years old, he owns a four-bedroom house in a sought-after residential community and credits his success to his mother’s cheerleading and God’s mercies.

The recipients were presented with their cheques at the awards ceremony.

Since the launch of the TIP Friendly Society Scholarship Awards programme in 2002, more than 950 students have benefited.