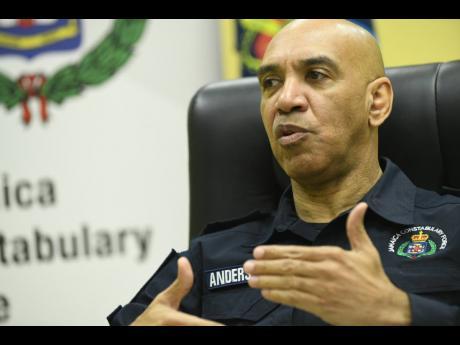 Anderson: " We believe that this trend is reflective of the ease with which more and more criminals have been able to acquire guns and ammunition." -File photo.

Commissioner of Police Major General Antony Anderson today raised concern about what he called a trend in multiple murders.

Anderson disclosed that so far this year there have been 99 such incidents, resulting in 218 victims.

He noted that in September alone there were 18 instances of double murders with one case of a triple homicide, with a total of 39 victims.

With Jamaica's murder tally currently at 1,171, the police commissioner expressed worry about the frequency of double murders.

“We believe that this trend is reflective of the ease with which more and more criminals have been able to acquire guns and ammunition,” said Anderson at today's monthly press briefing of the Jamaica Constabulary Force.

Anderson also noted that in many of these incidents, including some where multiple persons have been targeted, some of the victims who were thought to be innocent bystanders were revealed through police investigations to have had close associations with the gunmen's targets.

He stressed that persons who have close affiliations with criminals are at greater risk of becoming victims of gun violence.

The commissioner's warning comes on the heels of the constabulary force's Operation Relentless II policing initiative, which was launched on September 23.

Anderson disclosed that 106 persons have been arrested and 20 illegal firearms have been seized under the initiative so far.

Of those arrested, 34 were taken into custody for illegal possession of firearm and seven for murder.

Anderson told the briefing that Operation Relentless II is expected to continue into 2023, even as he urged law-abiding Jamaicans to cooperate with the police in cracking down on crime.