JCF set to increase numbers by 1,200 this fiscal year 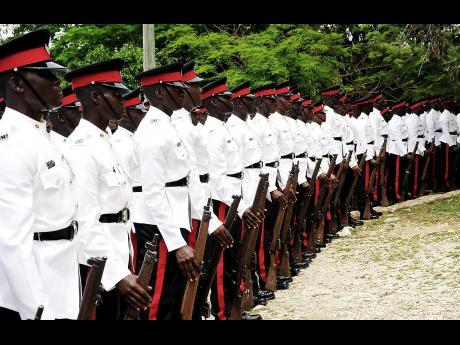 The JCF has been on a recruitment drive to bring in approximately 1,300 new members this year. - File photo

He made the announcement Tuesday during the JCF's online press briefing on crime and violence, where he also noted that the police force has been bolstered by the recent addition of 328 constables to aid with the ongoing Operation Relentless II crime-fighting initiative.

“We continue our strategic push toward bringing the membership of the JCF closer to the 15,000 mark. Our programme of recruitment continues in earnest, and we believe that at the current rates, we are on target to recruit 1,200 additional members by the end of this fiscal year,” said Anderson.

He is urging young people to consider a career in the police force.

The JCF has been on a recruitment drive to bring in approximately 1,300 new members this year, with special focus on targeting high-school students and changing the organisation's gender profile.

“We have also been rolling out our electronic system of keeping records across divisions in the Corporate Area, specifically the Kingston Eastern, St Andrew Central and St Andrew South divisions. These divisional headquarters and five stations within these divisions are utilising the new system, and we will continue the roll-out across other stations and divisions within the coming months,” said Anderson.