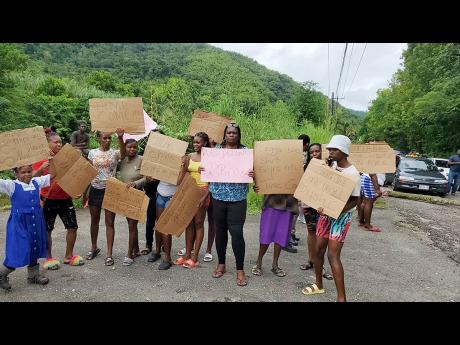 Contributed
Residents of Frankfield in Clarendon stage a protest for a new bridge to be installed for the benefit of surrounding communities. 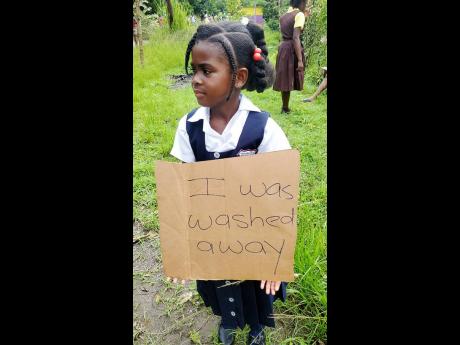 Contributed
A young student holds a placard as part of a protest staged by residents demanding a bridge in Frankfield, Clarendon.
1
2

KAREN CARTY, councillor caretaker for the Frankfield division, is appealing to Clarendon North Western Member of Parliament Phillip Henriques to do something about the two bridges that were washed away in the 2017 flood rains.

The plea comes on the heels of a woman and a child being swept away, but were miraculously saved last Thursday while crossing the raging Rio Minho River in Southwood during heavy rains.

“We are appealing to the current MP to do something before something do us. Leave a trademark in North West Clarendon, you have been here for two years. If it is even one major project, carry it out,” she urged.

Carty, who said that she has been living in the community for about 42 years, complained that it is very frustrating being on the road and having to rush home whenever it threatens to rain in order to cross the river.

“Time after time when the river comes down, we have to sit for long hours before the river is drawn. It is very frustrating when you have to carry your clothes in your hand and put on your clothes a riverside and all dem something deh,” she complained.

However, Henriques said that since taking over in late 2020, he has been “representing like crazy”.

Pointing out that the bridge was washed away while Richard Azan was the MP, he said he immediately began advocating for a new bridge for the community after winning the election.

“I have had countless meetings with Minister [Everald] Warmington and National Works Agency about the state of the bridge,” he said.

Henriques also disclosed that he has had several meetings over the past six months with residents, including Carty, regarding the bridge.

He insisted that almost every week he has been making representation on the issue.

“This year, Mr Warmington came out in Parliament in his budget speech [and said] that he would be making it a priority,” he told The Gleaner.

He noted that the allocation of funds for the project is out of his hands.

“This is not an issue about me not representing, I have been representing like crazy,” he said.

Councillor for the Frankfield division, Clive Mundle, who empathise with the residents’ plight, is also calling for the matter to be addressed. Referring to the situation as a disgrace, he said it doesn’t matter which government is in power.

“Because at the end of the day, the people of Southwood that’s where they live. They don’t have any choice, they have to get home and they have to come out to do their business and have to go back home. That’s that only way they can use to go home,” he said.

“It’s from 2017 enuh, so it’s five years now and it don’t matter which government in power. You must can put up a bridge, even a walk-foot bridge inna five years,” he added.