‘Some people are in the business of making the country unsafe’

Holness says those involved in criminal activities have to be deterred 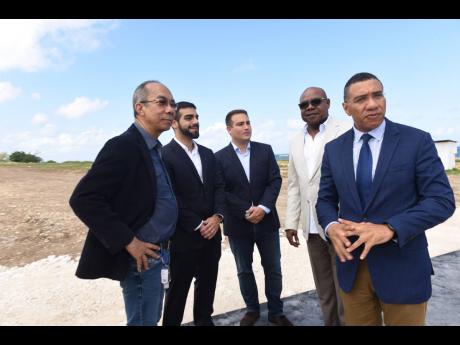 Prime Minister Andrew Holness says that although more people are in jobs, there are several sectors struggling to find workers. This, according to him, is largely because a substantial number of the country’s six per cent unemployed have chosen to be involved in criminal activities.

Holness argued that the six percentage points in unemployment are not an indication that the country does not have people who should be in employment amid the labour shortage impacting several sectors.

“We need them, but where they are now, they are not contributing; and so we have put in place certain measures to deter them from going into that business and to bring them out of that business. But there doesn’t seem to be this general acceptance and understanding in our Parliament of the problem, but we will see ... whether or not good sense will prevail,” the prime minister said, while taking a jab at the Opposition People’s National Party (PNP) on Friday, ahead of his administration’s failed bid to secure an extension for the SOEs in the Senate.

The Government declared states of emergency in seven parishes to control violent crimes.

Prior to the vote, Prime Minister Andrew Holness appealed to members of the Opposition to support the security measure, pointing out that it works, but in the end, 44 voted yes, four ‘no’ votes were recorded, and 16 members were absent.

On Friday, the resolution was defeated by the eight senators from the People’s National Party, who refused to support the initiative, declaring that there were no compelling reasons to warrant the Government’s use of the special powers of the SOE at this time.

Ahead of that vote on Friday, Holness claimed that the people of western Jamaica understood the reasons for the security operations, but were not sure that the PNP did.

“…I know the people in western Jamaica get it, I hope that the minority in Parliament also get it,” the prime minister said, to loud chairs and laughter during a groundbreaking ceremony for the construction of the 451-room Unico Montego Bay hotel in Lilliput, St James.

He noted that the Planning Institute has said in their latest projections that Jamaica, in spite of those who make the country unsafe and insecure, will grow between four and five per cent this calendar year.

“That’s an amazing statistic, even in the global context. Now, can you imagine if we didn’t have the deadweight of those who are working against growth and development who are involved in crime and making the place in some communities insecure” Can you imagine if we didn’t have that to deal with and, as a nation, we were all concentrated on utilising our God-given assets like tourism? We would be an amazing country, which is why I believe that no effort should be spared in ensuring that we conquer this monster of crime and violence,” Holness said.