Tufton: No need to fuss about imported skilled labour 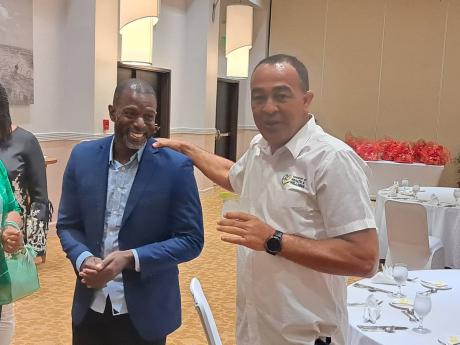 Christopher Thomas
Health and Wellness Minister Dr Christopher Tufton (right) interacts with Patrice Monthrope, the Senior Medical Officer at the Hanover-based Noel Holmes Hospital, during a dinner reception held in honour of the first batch of nurses working in Jamaica under the Ministry of Health’s Code Care programme. The dinner was hosted at the Hilton Rose Hall Resort and Spa in Montego Bay, St James on Tuesday.

HEALTH AND Wellness Minister Dr Christopher Tufton says there should be no concern about the importation of skilled labour for construction projects like the Cornwall Regional Hospital’s (CRH) restoration or the building of the Western Children and Adolescents Hospital, as Jamaica is short on the necessary skill sets.

Tufton made the declaration in a media interview on Tuesday during a dinner reception held in honour of the first batch of nurses working in Jamaica under the Ministry of Health’s Code Care programme. The dinner was hosted at the Hilton Rose Hall Resort and Spa in Montego Bay, St James.

“The reality is that with the work that is taking place nationally, whether in construction of one form or another, there is a shortage of certain skilled labour, so that has created a little challenge. We anticipate that we may see more skilled labour coming in from China to support the Chinese contractors, not necessarily because it is a desired position, but because we do not have the local personnel,” said Tufton.

“There is no doubt that in many areas, for example nursing, we have a shortage, and that is known. The issues around needing to bring labour in, for me, is not an option; it is going to become necessary if we are not to slow the pace of economic development in a number of areas,” Tufton added.

“I am not convinced that we need to make too much of an issue of it, because the reality is that it happens now, where we talk about the Chinese contractors and we see the Chinese are here,” Tufton continued. “Jamaica is one of the most open societies in the Caribbean, in the region, maybe in the hemisphere, where we have large nationalities, developed countries and developing countries represented here in business in some way, shape or form.”

In April this year, Prime Minister Andrew Holness indicated that Jamaica could be forced to import skilled labour for the construction industry in light of a shortage of labour. At that time, he stated that many persons in Jamaica who register in schools do not get a skill and end up dropping out, being targeted for gang recruitment and ending up in a life of crime.

The Opposition People’s National Party (PNP) subsequently blasted Holness for his utterances, with Spokesperson on Education and Training, Dr Angela Brown Burke, saying that steps should be taken by the Government to provide more employment opportunities for Jamaicans and to increase the pool of skilled workers in order to fill job vacancies.

But Tufton said on Tuesday that allowing necessary skill sets to enter Jamaica will be crucial for national development, even as he acknowledged that training is essential for the local population.

“The people who make an issue of the utterances of the prime minister and others, that we need this openness, are ignoring the fact that we already have it and that without it we would be worse off. It is a fact that we need to do more to train and upskill our local population, because there are people who are either underemployed or unemployed, (but) the idea of allowing skill sets to come in where they are absent is absolutely essential,” said Tufton.

The health minister also provided updates on the progression of work at the Western Children’s Hospital and the CRH, both of which are slated for completion by 2024.

“The Children’s Hospital is going well. We had some issue with skilled labour, and in fact we placed an ad in the social media pages around carpenters and masons, because we need a local labour content outside of the Chinese workers who are given permission to come in,” said Tufton.

“The CRH is doing well in terms of the rehabilitation, and a lot of work is going on in terms of reinforcing the structure,” he added. “We are finalising discussions around the final phase, where you go in and put in the partitions and doors, and we are hoping that sometime next year that will start.”