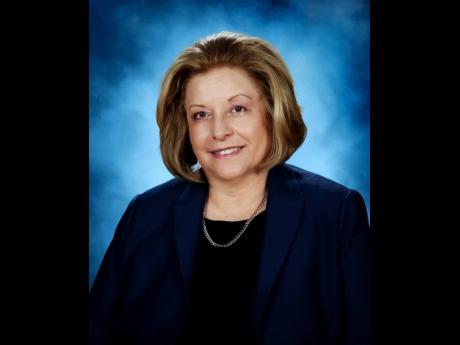 Jamaica-born educator Dr Denise Aloma has been honoured by the United States Department of Education with the 2022 Terrel H. Bell award for Outstanding School Leadership. She was one of only nine educators selected from across the United States for recognition to the National Blue Ribbon Schools Award.

Dr Aloma, who has been an educator for the past 51 years, 40 of which she spent in the classroom in Ft Lauderdale, Florida, currently serves as principal of St Thomas Aquinas High School, a position she has held for the past several years.

Born in Kingston, Dr Aloma attended Blake Prep school and later Alpha Academy Convent of Mercy. She later attended the University of Windsor in Canada, attaining her bachelor’s degree in English. She returned to Jamaica upon graduation and taught at Alpha for six years before migrating to the United States in 1978.

At St Thomas, Dr Aloma first taught in the classroom and later served as vice-principal before assuming her current position as principal.

Dr Aloma said that she was “humbled but honoured by the award”.

She described her career choice and journey as the “best, most noble profession that directly impacts the future”.

“I have gotten more than I have given as an educator. I take satisfaction from the thousands of lives I have touched over the years,” she told The Gleaner.

She recalls fond memories of her years in school in Jamaica, where she says discipline was a key ingredient for success.

“The global deterioration of discipline has led to the decay we are seeing in society. Where there is discipline and respect, children strive,” she said.

The award is named for the US’ second secretary of education - Terrel H. Bell - and recognises persons who demonstrate exemplary school leadership, and the role they play in providing and guiding students toward excellence, often under trying circumstances. It is part of the National Blue Ribbons to US schools for their overall academic excellence or by closing the gap in achievement among students’ subgroups.

Dr Aloma was nominated for the award for her commitment to encouraging successful teaching and learning at her school and for ‘doing what it takes to help students attain high educational standards’.

She urged societies to acknowledge the value of teachers, noting that a failure to do so will result in high quality teachers leaving the profession.

She has received numerous awards, including the 2021 Power Leader of Education Award from the South Florida Business Journal.

Reluctant to speak about her community-outreach efforts, Dr Aloma volunteers for Food For the Poor and is the motivator behind the Study Skills programme, which she has taken to several countries to help improve children’s learning skills.

“When you get much, you should give back much,” she said.

The married mother to three adult sons said that while she resides in Florida, her heart is in Jamaica, and she visits as often as she can.