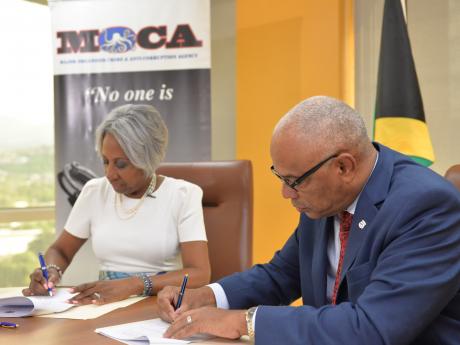 Under the programme, Crime Stop will use its award-winning system to collect the tips, process the information and issue reports to MOCA for analysis, preparation and action. - JIS photo

Jamaicans are being encouraged to report corrupt public officials and high-level criminals by utilising the new tip line established by the Major Organised Crime and Anti-Corruption Agency (MOCA) in partnership with Crime Stop.

It will give members of the public an opportunity to make reports related to public-sector corruption, organised crime, lottery scamming and other serious crimes, and to receive rewards for information leading to successful operations and arrests. These rewards range from $10,000 to $1 million.

Speaking at the launch of the initiative, MOCA's Director General, Colonel Desmond Edwards, said that the citizenry is perhaps the most critical stakeholder in the fight against corruption, noting that approximately US$750 million is lost annually due to corrupt activities.

He said the new tip line is “an effort to empower and encourage our citizens” and expressed his hope that the programme will help to develop “good intelligence and, ultimately, good cases”.

Edwards hailed Crime Stop as a crucial partner, which “has the skills and the expertise and, most importantly, the unenviable track record of never having compromised the identity of a tipster”.

Under the programme, Crime Stop will use its award-winning system to collect the tips, process the information and issue reports to MOCA for analysis, preparation and action.

In her remarks, Chairperson of the National Crime Prevention Fund (through which Crime Stop operates), Sandra Glasgow, congratulated MOCA for launching 888-MOCA TIP and allowing citizens to utilise “a trustworthy, confidential channel where they can feel safe in sharing information anonymously”.

Director of Communications and Client Service Excellence at MOCA, Major Basil Jarrett, said that Jamaicans can expect to see several commercials and messages in both the social media space as well as traditional media pertaining to the tip line, in short order.