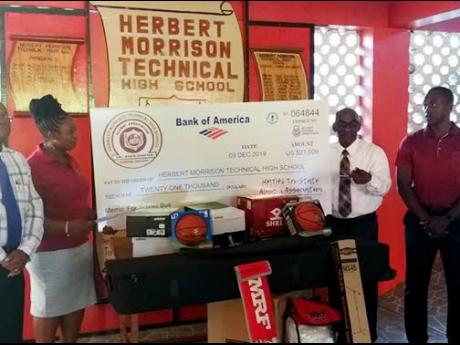 File
Principal Paul Adams (second right) receives a 2019 donation of US$21,000 from the Tri State Alumni Association for the purchase of a bus for Herbert Morrison Technical High.

The members, Althea Palmer and Dwight Meikle, told The Gleaner in early January that the non-profit entity was left insolvent and unable to assist students after an unauthorised US$21,000 donation was made to the school in 2019.

Palmer said that the decision was not put to the wider membership of the organisation, but was instead made by the executive, which she said breached a bylaw.

She said only US$700 was left in the account, limiting the Tri State chapter’s ability to assist the school’s track team to the Penn Relays, as well as several students with Caribbean Secondary Education Certificate examination fees.

However, Finlayson has countered Palmer’s claim, arguing that the association has an account balance of more than US$11,000.

She has also insisted that one of the entity’s bylaws gives the executive the power to make final decisions on its behalf.

Additionally, she said that Palmer and Meikle have not been integral to the affairs of the association since 2020.

Finlayson said as head of the organisation, she had been in contact with Herbert Morrison principal Paul Adams about the donation, which translates to J$3 million, but learnt that he could not unilaterally act in returning the funds.

“He’s been aggressively attacked, only for me to discover that he cannot make the decision we’re asking him for,” she said.

The Gleaner had contacted Adams, who said that the money is being held in the school’s account. He emphasised that the process of returning the funds, as requested, was not a simple task.

“When we are returning money, it is has to follow a particular governmental protocol. So, all I can tell you now is that the money is in the school’s account,” Adams said.

Finlayson told The Gleaner that that reason was communicated to the members of the organisation and Meikle, who was present during a virtual meeting in November.

She said that she had asked members then to allow her to resolve the situation, and gave a three-month deadline for that commitment.

“I said to them, give me until February to come back to you with a resolution,” she said.

Meanwhile, she said that the association contributed to the school’s Penn Relays team by taking care of food and accommodation for the participants.

She said another chapter covered airfare.

“To say that we are bankrupt and we couldn’t do it, and another chapter had to do it, [is] completely false,” Finlayson maintained.

She said the Tri State Chapter also rehabilitated the Montego Bay school’s playing field last year, and in 2021 paid over US$3,000 in school fees for more than a dozen students.