Karoline Smith is Lion of the Year 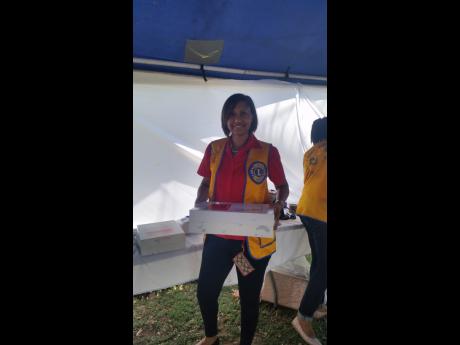 Contributed
Karoline Smith on duty during one of the Lions Club of New Kingston's health fairs. 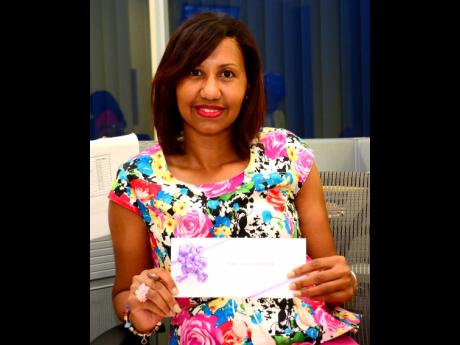 Contributed
Karoline Smith holds a gift certificate she received as part of her prizes for being named Lion of the Year.
1
2

Giving back can make a real difference in the lives of those less fortunate in our community. It's easy to get so wrapped up in fixing your own life that you forget about helping others. And while it's important to put yourself first sometimes, it's even more important to help others whenever you can.

Karoline Smith, marketing implementer for the Western Caribbean at Sol Petroleum in Jamaica, was recently chosen as Lion of the Year for the Lions Club of New Kingston. Smith believes that an important part of living a happy and fulfilling life includes sharing, helping and supporting people, even strangers.

Being generous, she said, is not always about altruism, but becoming more generous and compassionate will have real tangible benefits in your own life.

"I have always felt a need to serve. For many years, I have been affiliated with multiple service organisations in an informal way, however, after an invitation from a former co-worker I was encouraged to join the Lions Club of New Kingston," Smith said.

Since joining the club almost 10 years ago, Smith has served in different capacities including fundraising chairman, social chairman, director, third vice-president and currently holds the position of second-vice president.

"There is a sense of pride and satisfaction when you are able to help those in need. There is so much need. People may forget what you said or what you did, but they will never forget how you made them feel. Everyone needs help at some point in their lives and everyone also has the ability to help in some way or another," Smith said.

The objectives of the Lions Club, she said, is to be the global leader in community and humanitarian service. The Lions Club of New Kingston, she said has embarked on a number of projects to meet this goal, including its signature outreach, the Lions Sight Clinic that has been in operation since 2010. According to Smith, hundreds of persons have been screened, supplied with corrective lens and referred to eye specialists.

This year, she said the plan is to increase the number of persons screened, and to collaborate with companies for funding and, in return, offer free screening for their staff members. There are also plans to perform minor eye surgery as the next development stage of the clinic.

Other community outreach projects include the club's major fundraiser, a musical show being held since 2009; assisting the elderly at the Golden Age Home; aiding and working with the visually impaired at the Adult Blind Clinic; supporting and aiding the youth at Walkers Place of Safety; and assisting the 4H Club in the construction of a shade house project that is to support the schools in the Corporate Area with plants.

The New Kingston Lions Club has also contributed to the growth of the Lions movement having sponsored two Leo Clubs and a Lions Club. On May 25, 1994, the club sponsored the Leo Club of New Kingston and on October 3, 2013 an Alpha Club was sponsored at Campion College.

"Whatever I do, I give it my all. I go the extra mile because anything that is worth doing should be done well," Smith said.

"Giving also connects us to others, creating stronger communities and helping to build a happier society for everyone. And it's not all about money we can also give our time, ideas and energy," she added.

The Lions Club of New Kingston is part of the world's largest service organisation of over 1.4 million Lions in over 46,000 Lions Clubs across the world. The club was chartered on March 27, 1992 bringing together a group of committed professional and retired persons providing them with an opportunity to give service to the less fortunate.