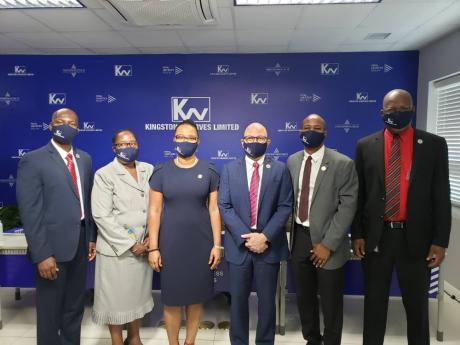 Kingston Wharves Limited (KWL) will invest approximately US$40 million in infrastructural development projects over the next 18 months.

The figure, which equates to about J$6 billion, will be primarily used to redevelop Berth 7 as KWL moves to optimise its terminal capacity, and in keeping with its strategic imperatives of infrastructure readiness, said the terminal operator’s CEO, Mark Williams, at its annual general meeting on Thursday.

Williams said that a US$30-million investment will position the company to capitalise on opportunities in shipping and logistics business globally.

“Shipping is a highly competitive international business, hence we must stay ahead of the game by investing in our infrastructure, as it goes to the heart of our competitiveness,” Williams said

Additionally, KWL will expend US$5.2 million to acquire a super Panamax crane, which will arrive this year, as well as roughly US$900,000 on the rehabilitation of its terminal pavement.

The developments are aimed at improving berthing to offer an optimal experience for vessels calling on the Kingston Wharves terminal.

Williams said, “Shipping vessels are being built at larger sizes, and international shipping customers are consolidating vessel loads on these larger ships. This post-Panamax crane will add to our equipment capacity to service these larger vessels, and hence being able to better compete with other well-equipped global ports.”

What’s more, Kingston Wharves will invest in the expansion of its warehouse and logistics operations, and leverage its special economiczone designation, to increase its competitiveness.

“We currently have over 340,000 square feet of warehouse space and are heavily involved in customised logistics services, serving clients in multiple sectors,” Williams said, adding that “with the planned new construction and acquisitions, coupled with our ability to leverage our Special Economic Zone designation, we will be positioned to attract new investors and partners.”

It reported that shareholder equity grew by 22.5 per cent when compared to the previous year. The company declared dividends of $772 million, in line with the sum for 2019, and earnings per share of $1.57.

For its first quarter of 2021, the company recorded earnings of $1.85 billion, down one per cent over the comparable period. Operating profit also dipped to $681 million, seven per cent below the similar period last year.

That notwithstanding, Williams remains optimistic about the company’s outlook, noting signs of recovery amid efforts to curtail the pandemic. “Motor vehicles are up four per cent, warehouse activity is up 12 per cent, and bulk and break-bulk cargo are up 29 per cent,” he shared.

KWL is a multipurpose terminal which comprises nine deep-water berths, serving 1,000 vessels which move cargo to over 30 destinations annually.