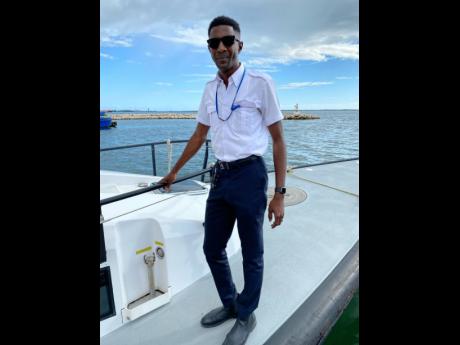 For many people, a career in the shipping industry seems like an unlikely choice, but others are making this improbable dream a reality.

One such person is Andre Sewell, an apprentice marine pilot with the Port Authority of Jamaica (PAJ). His journey with the island’s chief maritime agency began in May 2018 and has, so far, been a heady and rewarding journey.

When asked what he loves most about his job, Sewell replied, “The absolute lack of monotony. Even a slight wind shift changes the equation as it relates to the ship-handling operations I have been involved in so far during my training period. It’s never boring, it’s never the same, and that’s what I love.”

It’s that enthusiasm for the near four-year career with the PAJ that has seen his passion for maritime increase. While he’s had several projects that he has fond memories of, one in particular stands out.

“Favourite project, so far, is the rehabilitation of the AIS Traffic Stations in Ocho Rios, Discovery Bay and Lover’s Leap in St Elizabeth. This particular project was beyond the scope of my normal duties as an apprentice marine pilot,” Sewell said, adding that it was “a bit of a passion project of Pilot Christopher Maxwell”.

“However, having tagged along, it was interesting to be involved in the maintenance of this unseen bit of tech which assists shoreside marine operations islandwide. These stations facilitate accurate, real-time data on sites such as Marine Traffic, providing shoreside subscribers with accurate real-time vessel movement data.” He noted that despite the technology not being known to most, it helps to make life easier for everyone with shipping interests in Jamaica’s territorial waters.

And for those looking to enter the industry, he had this piece of advice, “Be ready to adapt and embrace technology, [as] the PAJ has been introducing technology to innovate and streamline work processes across most of its departments. Be ready to be a part of that, as it’s essential to keeping the world-class facilities we operate here in Jamaica relevant in the future.”