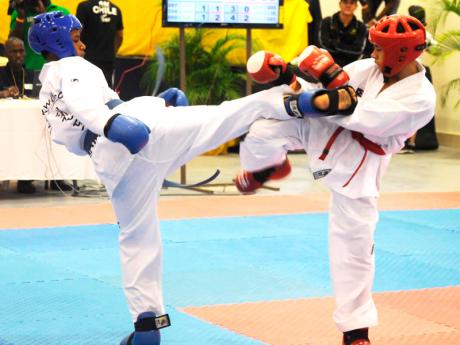 Jamaica's Tye McKay (left) in sparring action against Wilfred Padilla of Costa Rica on the first day of action of the International Taekwon-Do Federation World Cup held at the Montego Bay Convention Centre on Wednesday. McKay won the matchup to advance to the next round. 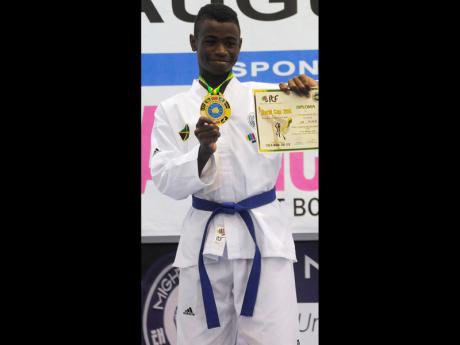 WHAT a difference home advantage makes! Jamaica's martial artists mined six medals on yesterday's opening day of the International Taekwon-Do Federation (ITF) World Cup in Montego Bay, four more than they have ever won at any ITF world tournament.

Bolstered by an army of coloured-belt pre-juniors and juniors, who do not normally travel to ITF world events due to cost constraints, Jamaica predictably won their first two medals, gold and bronze, from the junior ranks.

Jamaica's medal tally stands at two gold, two silver and two bronze after day one of the three-day event, the biggest martial arts tournament ever staged in the Caribbean.

Wilkins was at a loss for words after learning he had won Jamaica's first medal, more so gold.

"I didn't know that," he said. "It feels amazing to be the first, makes me want to work even harder to get more gold."

"I like martial arts. It's fun and you make a lot of friends," he added.

The veteran Hall, who last competed internationally at the 2010 ITF World Championships in Quebec, Canada, was Jamaica's only fighter on centre stage yesterday, but was outmanoeuvred by Argentina's Esteban Lafuente.

Hall led during the first round after catching the Argentine with sharp side kicks, but his rival soon figured him out and stayed outside for the rest of the match and won points by landing counter punches on the Jamaican.

"He saw the legs getting up and avoided them. I tried to have him settle and come in to the kicks, but he didn't. When I punched, he had some follow-up punches which he scored with," 42-year-old Hall explained.

Action continues this morning with junior and adult black belts taking the mats inside the Montego Bay Convention Centre, with Jamaica on the hunt for more medals.

Nathan DaCosta of Mandeville Taekwon-Do vs Severi Mustonen of Finland