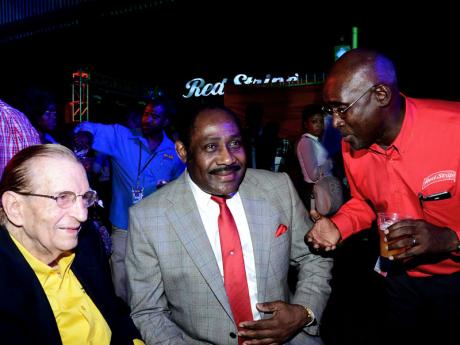 Beer company Red Stripe has renewed its sponsorship of the National Premier League for another five years.

The league is set to kick off on Sunday with the playing of six matches.

Without revealing specific financial details of the deal, Erin Mitchell, brand manager of Red Stripe, said the competition is all about enriching and uniting communities through a shared passion for football.

"The goal of Red Stripe is to provide meaningful benefits to the communities through quality football. We are looking at online streaming, instant uploads of replays on social media and the RSPL highlight show, to make the game more interactive and exciting," said Mitchell, during Wednesday's launch of the competition held at the company's head office on Spanish Town Road.

She added that Red Stripe's sponsorship of the league and partnership with the Premier League Clubs Association (PLCA), will help the 12 participating clubs reinvest money to strengthen their operations, contribute towards marketing and promotion of the league and reward football fans through consumer activations.

"We look forward to building star players in the communities and creating branded memorabilia for fans all across the island and the world, and make the purchase of these as seamless as possible," Mitchell said. "This season, the Red Stripe Premier League will create more memorable experiences for all football fans across Jamaica," she added.

Edward Seaga, chairman of the PLCA, said they are still in negotiations with Red Stripe about the financial terms of the sponsorship.

"That has not been decided yet, but they are still working on it," said Seaga.

"But possibly we might have something new that can entice the people, we are looking at Sunday night television so that we can have two televised games for the week," Seaga added.

The competition will kick off at the National Stadium with a double-header. Last season's beaten finalists, Waterhouse, will face newly promoted side Barbican at 4 p.m. and Harbour View will tackle archrivals Arnett Gardens at 6 p.m.

"It is a good double-header and we plan to have more double-headers at the stadium this season," said Seaga. "When you have a good set of teams matched up like that, that can draw fans, then we plan to go to the stadium. We can only do this when we have the right teams because we can't just pick any two teams and so Harbour View and Arnett are good match-ups," he said.