Williams-Mills looks at life after track 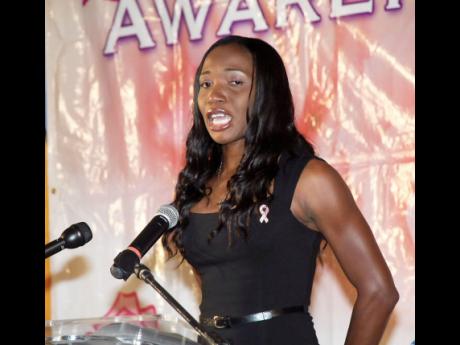 Jamaican quarter-miler Novlene Williams-Mills is one of Jamaica's leading figures in the event on the international stage. It has been that way for over a decade, but is one of track and field's biggest embodiments of perseverance now driven by different ambitions?

Williams-Mills walked across the Grande Jamaica Ballroom at The Jamaica Pegasus hotel, clutching her nomination plaque at the Courtney Walsh Award for Excellence on Thursday night.

The St Ann native didn't win the award this time around; the honour went to fellow sprinter, Michael Frater, but the 32-year-old has already won enough in recent times - the 400m Diamond race, a Commonwealth Games silver medal and most important, her fight against breast cancer.

It's that sense of fulfilment and success in the face of adversity that has the athlete looking forward to the coming season, knowing that she is nearing the end of her race of life as a professional athlete, with family life among her short-term ambitions.

"I can't say just yet if it will be two years of competition for me," said Williams-Mills, in reference to the 2015-2017 spell that includes two World Championships and an Olympic Games.

"I'm not saying next year's World Championships will be the last either though, because every year you have to look how the year goes; we'll see. I almost packed up my stuff in 2013 and I came back and had a great year."

After being diagnosed with breast cancer just before the 2012 Olympic Games, the quarter-miler stormed back to make the final at last year's World Championships before coming back to finish in the top three of all 15 of her 400m races this year, while winning nine.

"Getting the bye (wild card entry because of her Diamond race win) for World Championships next year helps and takes a little bit of pressure off me because I won't have to come to Jamaica to try and make the team again at Trials, so that helps," said the athlete.

"You have to think about life after track. For a second, I got a glimpse of that in 2012. It (cancer) could have taken everything away from me in a second. I don't have the family that I have always wanted and that is something that I am looking forward to," said Williams-Mills.

"You hear people talk about motherhood and family and for me that is something that I want to experience. I want to build my own family and live that life as well," she added.

Also big on the athlete's agenda is her intention to have an even greater effect on breast cancer awareness.

"If I can do an interview or if someone is having a function and wants me to be their guest speaker, I'm always in for it because I always want to spread the word on breast cancer. I want them to see me and know that I have been through it and I'm still standing," said Williams-Mills.