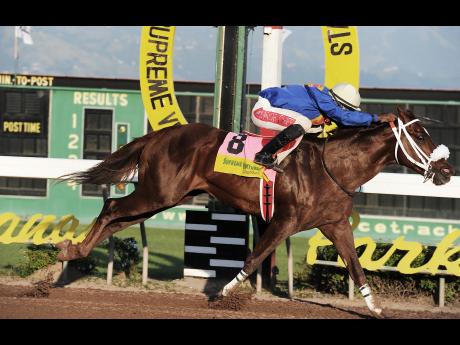 A Pick-9 jackpot exceeding $10 million is a possibility on tomorrow's Lotto Day at Caymanas Park.

A 27-1 upset by HOVER CRAFT in the fifth race for the Mark My Word Trophy last Saturday ensured that the popular exotic bet eluded punters for the seventh consecutive raceday and the carryover stands at a whopping $7.3 million. The Pick-9 commences from race four on the 12-race card.

Bankers abound on the card. Look to SECRETENA in the sixth race over 1100 metres (maiden four-year-olds and up) for the Lotto Millionaire Trophy, ALACRANN who has bypassed the Lotto Classic to run in the seventh race over 1820 metres for overnight allowance horses, COLD GROUND in the 10th for $250,000-$210,000 claiming horses over 1500 metres, and SEEKING MY DREAM in the 11th to ease to wins.

The first Super-6 commences from race one to six, the late Super-6 from race seven to 12. Both offer guaranteed minimums of $750,000.

We look at the second Super-6 which kicks off with a 3-y-o and up overnight allowance race for the Lotto 'A Ticket to Your Dream Trophy' over 1820 metres.

Topline three-year-old colt ALACRANN was third to ALI BABA and SEEKING MY DREAM in the April 6 2000 Guineas over a mile and should not be opposed.

The chestnut colt by Traditional out of Maria's Appeal comes to the wicket well prepared and now venturing over two turns, should pack too many guns for the very fit TIMEFORARMS and MILITARY MOVE. Champion jockey Dane Nelson has the ride from the convenient mark of 52.0kg.

All have shaped promisingly in recent races, but the edge goes to SWEET DIMENSION from the in-form stables of Patrick Lynch.

The speedy CRUCIAL APPEAL was most impressive against the best sprinters in the land in winning the recent Lady Geeta Trophy grade one race over 1200 metres ahead of then favourite UPPA TUNE and is fancied to repeat in the $1.5 million Lotto Sprint Trophy over 1100 metres.

The five-year-old gelding from the stables of 'Wacky' Lynch won in a fast time and has picked up only 2.0kg for that victory. He should take a lot of catching over the shorter distance. UPPA TUNE (Nelson up), is as big as they come and should ensure he is extended in the closing stages.

COLD GROUND (Jevanne Erwin up), an unlucky loser to SIRMANDI over a mile last time out, gets the nod over recent winner EL PATRON (Nelson aboard) and TOKICO in the 10th race, the Lotto Encounter Trophy over 1500 metres, while it should be 2000 Guineas runner-up SEEKING MY DREAM (Omar Walker up) to lead home the unbeaten SOUTHERN CRUISE with Nelson aboard in the 11th, and the Welsh Soutar-trained ALDEBARAN (Erwin up) to repeat at the expense of stable-companion VERONICA B and TERRA MARIQUE in the closing race over 1300 metres.