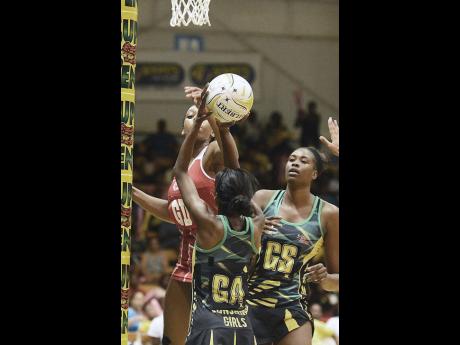 File
Romelda Aiken (right) in action for the Sunshine Girls against England earlier this year.

Jamaica's star goal-shooter, Romelda Aiken, says she is prepared for the 'Gold Rush Down Under' challenge and is ready, along with fellow ANZ star and 2015 joint league MVP, Jhaniele Fowler-Reid, to create some major damage at the Netball World Cup in Australia next month.

The Queensland Firebirds star, who fired her team to the ANZ Championship title recently, flew into the island on Friday to join up with the rest of the squad already in preparation for the championship. She told reporters that she was ready to "give her all" to take home the gold.

"We will do what ever it takes to win. It doesn't matter who is out there on the court, both of us (she and Fowler-Reid) are massive team players, and I think she (Fowler-Reid) is really excited that I'm coming back because it takes a little bit of work off her, but we are looking to create some major damage," she stated.

"I always love a challenge and I am going to do everything I can to make sure that we get there (title). For me, personally, it's just picking up where I left off in January. I know the girls have been training really hard and we are aiming for the gold, and we will definitely give it a really good blast,' she continued.

Winning the ANZ championship, being named MVP, becoming the first player to score over 4000 goals in the championship while tallying over 600 goals with over 100 rebounds this season, has been a massive confidence booster for the 26-year-old.

"I am a really humble achiever and all the things that happen throughout the year, you give God thanks for making it out injury-free. Of course, it will give us massive confidence going in, but for me, personally, it's just doing whatever it takes it ensure that I do my part to take us to another grand final,' she said.

She hopes her experience and knowledge of the top players in the ANZ league will be of service when Jamaica go up against their key opponents at the World Cup.

"It's a great experience for myself (playing against the top players in the ANZ League). Any time I go away and come back, I always try to tell the girls what I have learnt playing against them, and they always take it on board," she pointed out.