It's a crying shame 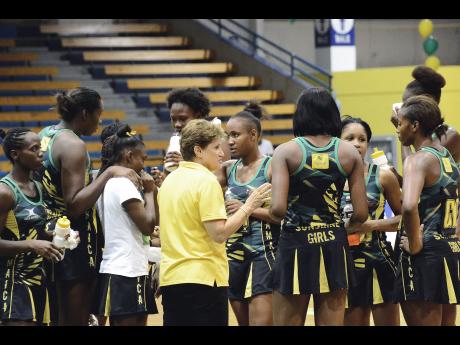 File
Netball Jamaica's technical director, Jill McIntosh, speaking to the Sunshine Girls during a break in a recent match against Barbados at the National Indoor Sports Centre.

It's a crying shame that the Sunshine Girls have had to make a public appeal for funding to reach the Netball World Cup. No team with the Girls' consistent record of performance should have that worry so near a major championship. It's just not right.

Lest we forget, Jamaica won the bronze medals at the Commonwealth Games last year and have consistently been in the world's top four for decades. Yet, while their top rivals play and practise indoors and play more or less full-time in professional leagues, Jamaica plays mostly outdoors with a player pool that is largely part-time. It's a miracle the Girls are still so good.

The sad circumstances drive home a point that has been coming to the fore for a while. Today's tight economic times make it impossible to spread the Jamaican sports dollar too thin. That has apparently hurt the Girls, but ask any fan in the street and he or she will probably wish they become World Champions next month in Australia.

That same fan probably would love the current golden era of Jamaican athletics to continue. Of equal importance would be return to lofty heights in cricket and a second appearance in the World Cup of football.

If those four sports are fully supported by Government and the private sector, others will feel the squeeze. Support to world-class individuals like champion swimmer Alia Atkinson would probably continue but someone would need to make the hard choice to rob Peter to pay Paul. As a lifelong devotee of one so-called minor sport, I'd hate to be that person.

Let's suppose Tiddlywinks Jamaica needs money. If funds are limited, spending that money on Tiddlywinks is a choice against supporting athletics, netball, cricket or football. It's a tough choice. That's made worse in a society where people are free to choose the sport they wish to play and organise.

Sport isn't solely about winning international championships. It teaches the health benefits of exercise and fitness and the value of hard work and cooperation. Beyond that, there is value for wins in regional or continental championships. Yet, if that meagre Jamaican sports funding dollar is split too many ways, no one will get enough. If things stay as financially tight as they are, someone will have the tough job of finding which sports to say no to. The Tiddlywinks people won't be pleased.