'I’m not planning to lose at the World Championships' - Bolt 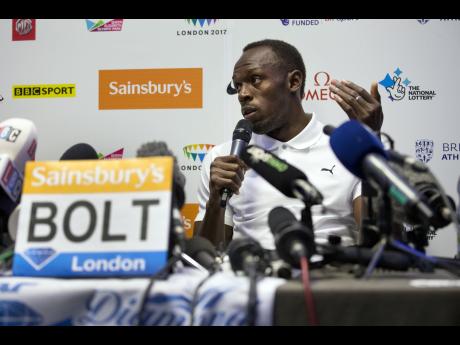 AP photo
Jamaican sprinter Usain Bolt, the world record holder and Olympic champion in the 100 metres and 200 metres, answers a question during a press conference in a hotel, ahead of competing in the Diamond League athletics meeting at the Olympic Stadium in London today.

Usain Bolt has the look of a man with very little concern.

On the eve of his return to the London Olympic Stadium, where he will compete in the 100m at tomorrow’s Sainsbury’s Anniversary Games, Bolt – the six time Olympic champion, made it clear that had no fear of losing at next month’s World Championships in Beijing, while noting that he is anticipating a positive performance here.

It doesn’t seem to matter to him that American Justin Gatlin has been the dominant force in the sprints, leading the world with a season best of 9.74 and an unbeaten streak nearing 30 wins; or that Bolt has only one 100m race to date and had to withdraw from two Diamond League commitments due to an injury concern; or that he has not ran under 9.90 since the 2013 World Championships.

“I’m not planning to lose at the World Championships,” Bolt affirmed when asked whether or not a win for Gatlin, who had been previously banned for doping would be bad for the sport.

“I never doubt myself, I look forward to competition,” added Bolt, the reigning Olympics and World Championships double sprint champion. “Beijing is a month away, I am focused on taking it a step at a time. I have been training well and pushing myself and if I execute well I know I will run fast.”

The Jamaican is entered alongside fellow Jamaicans Nesta Carter and Kemar Bailey-Cole, as well as Americans Mike Rodgers and Ryan Bailey, with Frenchman Jimmy Vicaut adding to a pretty solid field.

“I need to get my execution right, most of my races have been really poor so if I get a good execution, then the time will definitely come,” said Bolt, underlining the his focus tomorrow is to put together a good race rather than post a fast time.