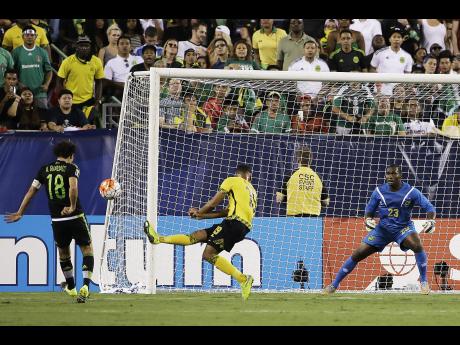 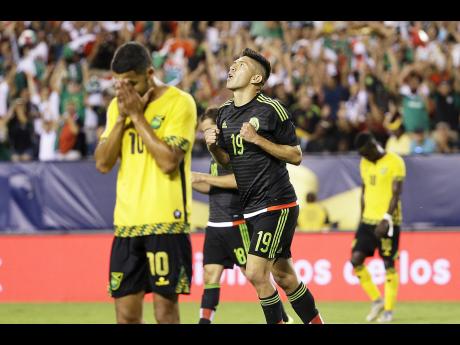 THE CONFETTI, the fireworks moment was not the one they had hoped for, with their players not on the podium.

Jamaica's dream of a historic CONCACAF Gold Cup turned into a nightmare at Lincoln Financial Field last night as its much-vaunted defence caved in for a 3-1 loss against Mexico in the 13th final of the Confederation championship.

Mexico took the lead at the 31st minute when Andrés Guardado sent a powerful shot past goalkeeper Ryan Thompson into the roof of the Jamaican net. Things went from bad to worse early in the second half as horrendous defensive blunders by centre half Michael Hector led to goals from Jesus Corona at the 47th and Oribe Peralta, with 61 minutes on the clock. By then, the game was as good as over.

However, Darren Mattocks, a goal hero in Jamaica's landmark 2-1 win over the United States, came up trumps for the second game running by scoring at the 80th minute to hand the Reggae Boyz a consolation goal.

Jamaica, though, did not go away empty handed as they lifted the Fair Play Trophy.

Coached by German Winfried Schäfer, Jamaica had beaten the Americans 2-1 in the semi-finals to notch several firsts on their way to the final.

Without creating an open shooting chance, the Reggae Boyz had a few near misses with balls played across goal inside the first half.

The chances, three of them, came literally seconds apart between the eighth and ninth minutes when Simon Dawkins barely missed a free kick whipped in by Rodolph Austin. Then Dawkins again failed to get a boot to a cross from Giles Barnes. Within seconds, Garath McCleary cut back a ball that flew among several players in front of the Mexican goal.

Then in the 14th minute, McCleary crossed to Joel 'Jobi' McAnuff at the back post. The latter aimed a headed pass at Adrian Mariappa, but the overlapping wingback was just offside.

That was one of several decent build-ups by the Jamaicans, who pressed Mexico deep to gain an advantage in ball possession and looked more dangerous up to the 15th minute.

Mexico started using the width and more long passes to make room. It gave them time to build their game with swift inter-changing and snappy passes. First, they were able to ease the pressure then started coming forward more.

By the 28th minute, they had three good looks on goal, with Corona having a header saved, then chipping a shot over the bar. Jesus Duenas also had a shot charged down.

Then came the opening goal. Following a miscued goal kick, Rodolph Austin picked up a yellow card on a foul, trying to prevent the Mexicans from breaking quickly on goal. The game was stopped for a while and the defence went to sleep.

The pass from the spot kick near half-line was played wide right to the unmarked Corona. He delivered a cross of pin-point accuracy to the onrushing Guardado, who guided the ball firmly one time just inside the left post. Goalkeeper Thompson had no chance.

The second half started disastrously, and within 16 minutes, central defender Michael Hector made two horrendous mistakes that led to two goals, and with Mexico 3-0 up at the 61st minute, the game was over.

At the 47th, he tried to dribble out of defence, lost possession to Corona, who went forward then hit a shot across Thompson to score.

Then at the 61st, Hector, unmarked, attempted to clear a grounded pass. He miscued and the ball went behind him to Peralta, who steered the ball past Thompson.