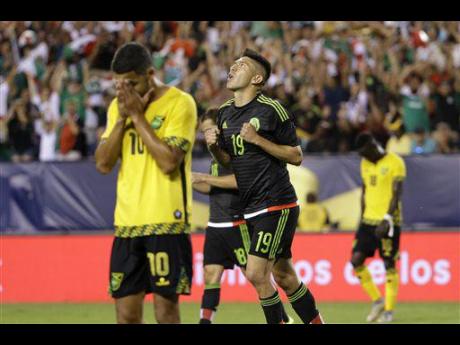 Joel McAnuff covers his face in disappointment as Jesus Corona celebrates a goal early in the second half.

PHILADELPHIA, Pennsylvania:
Jamaica’s head coach, Winfried Schafer, put an arm around the necks of some of his players following the team's disappointing 3-1 loss against Mexico in the final of the CONCACAF Gold Cup at the Lincoln Financial Field on Sunday night.

“I am very proud of my players,” Schafer praised his team - the first from the Caribbean to play in the Gold Cup final.

Jamaica had also beaten the United States for the first time on American soil, when they won 2-1 in the semi-finals at Atlanta Dome in Georgia.

“I’m a long time coach, I’ve never seen this spirit. It was a small group, I was very happy for the group,” Schafer said.

Mexico took the lead at the 31st minute when captain Andres Guardado netted from close range; and they catapulted as Jamaica plunged with horrendous defensive blunders by centre half Michael Hector, which led to early second-half goals from Jesus Corona at the 47th and Oribe Peralta with 61 minutes on the clock.

By then, the game was as good as over.

“This goal was too early,” Schafer noted of the time it took the Mexicans to score after the half-time interval.

“This goal was a killer goal.”

Of the mistakes, Hector said: “I was gutted.”

However, the 23-year-old vowed to “learn from the mistakes”.

Darren Mattocks, a scoring hero against the United States in the landmark 2-1 semi-final win, came up trumps for the second game running by scoring at the 80th minute to hand the Reggae Boyz a consolation goal.

Jamaica never went away empty handed, as they lifted the Fair Play Trophy.

“The football in the Caribbean is going up,” Schafer said, listing the achievements of Cuba, Trinidad and Tobago, Haiti and Jamaica in advancing past the group stage of the 12-year championship.