Ja fourth in track and field at Pan Am 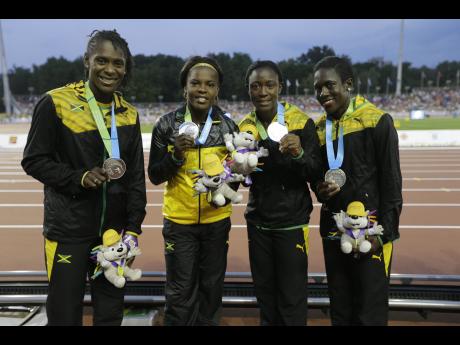 Jamaica had mixed fortune on last Saturday's final night of competition at the 2015 Pan American Games in Toronto, Canada.

The women picked up two relay silver medals, while the men failed in two bids to add to the tally.

The women's sprint relay team clocked 42.68 to finish behind the United States, who won in a Games record 42.58. The winners erased the 42.62 set by Jamaica in 1999. Canada were third in 43.01. The members of the Jamaican quartet were Samantha Henry-Robinson, Kerron Stewart, Schillonie Calvert, and Simone Facey.

Jamaica also finished behind the United States in the women's 4x400m. They clocked 3:27.27, with the winners crossing the line in 3:25.68. Canada took bronze in a season's best 3:27.74. The Jamaican quartet was Anastasia Leroy, Verone Chambers, Chrisann Gordon, and Bobbgaye Wilkins.

There was some drama here. After a brilliant second leg from sprint double champion AndrÈ DeGrasse, Canada crossed the line first but were later disqualified after an infringement by their lead-off runner. He stepped on the line just before handing over, and was penalised after Trinidad and Tobago protested. The United States were awarded the race in 38.27, with Brazil getting second in 38.60 and Trinidad promoted to third in 38.69.

Jamaica had a poor start in the men's 4x400m and were always playing catch up. They ended sixth in 3:01.97. Trinidad's Machel Cedenio ran a blinder on the anchor leg for his team, bringing them from out of the medals to gold medal in a season's best 2:59.60. It was also a season's best for runners-up Cuba in 2:59.84, while the United States took third in 3:00.21.