Still Gatlin to win on the wire ... 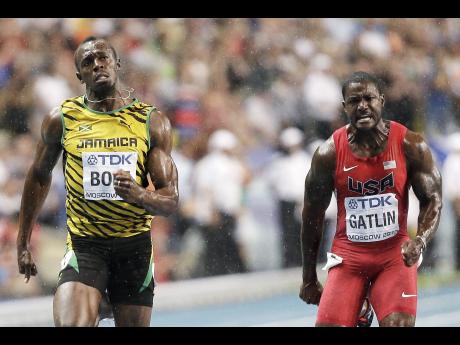 File
Usain Bolt getting the better of Justin Gatlin in the 100m final at the 2013 World Championships in Moscow.

Jamaica and indeed the entire world, got excited over the weekend on seeing world sprint king Usain Bolt return to some semblance of form with identical 9.87 second clockings in the heats and final of the 100 metres event at the London 2012 Olympics anniversary games.

Having been the first person brave enough to predict that Bolt would lose his World Championships 100m title to the widely loathed American Justin Gatlin, I watched both races with keen interest to see just how much my prediction was on track.

It was absolutely great to see the big man competing healthy again, and seeming to be relaxed in doing so. After all, my prediction in no way compromises my respect for Usain Bolt as the undisputed champion athlete, who is already the greatest sprinter to have ever lived.

Having said all that, though, and casting emotions aside, I refuse to recant on my prediction. Gatlin is still on track to beat Bolt in Beijing. A lot of the expectant Jamaican and indeed track and field officials and fans across the world simply don't want to see Gatlin dethrone Bolt. I don't want to see that either, but the reality remains the same even after the two races in London. Bolt has lots of work to do.

In the heats, Bolt was off to his usual ordinary start and indeed trailed Mike Rodgers up to about 70m before extending to get by the American before shutting down for a relatively easy win.

In the final, Bolt had an atrocious start and had to pull out all the stops to get by and then hold off Rodgers, as well as his fast-finishing stable mate, Kemar Bailey-Cole. Upon seeing the intensity of Bolt's effort in the final, I was surprised to see the clock showing 9.87. Of course, the conditions for sprinting were far from perfect - the track was wet, there was a -1.2 and -0.8 metres per second headwind in the heats and final, respectively.

As for the overall execution of the race, I would grade Bolt at about 6.5 out of 10. On that same scale, he needs to be closer to 9 out of 10 to beat Gatlin. Bolt and his astute coaching staff, led by Glen Mills, will have to pull out all the tricks with just under three weeks to go.

It is obvious from what we saw that Bolt has been working hard on the training ground. He looks much fitter and trimmer, and seems to have shed the excess bulk we saw earlier in the season. Race sharpness and his notoriously poor start continue to be his main areas of concern.

All things being equal, and if conditions are right, the feisty and resilient Gatlin should break 9.7 in Beijing. Therefore, by my estimation, the winner of that gold medal will have to run between 9.65 and 9.69. The big challenge for Bolt is to get that 9.87 down to 9.69 in very limited time.

A lot of the optimism coming from Jamaicans after Bolt's London appearances seem to be conveniently ignoring the fact Gatlin is still ahead of Bolt in terms of form, and, certainly, as far as times are concerned. It therefore follows that if both sprinters prepare and improve accordingly, then Gatlin is still the man to beat in Beijing.

One good thing coming out of Bolt's London runs is that the clash between himself and Gatlin, it appears, will actually take place in Beijing. For many moments this season, there were credible doubts as to whether or not this face off would materialise, but with Bolt showing his hand, it now seems certain the race is on. From where I am sitting, Gatlin, on form, should win that 100m event on the wire ahead of Usain Bolt. Again, for the record, I sincerely hope I am wrong.