It was my decision - Alvas Powell 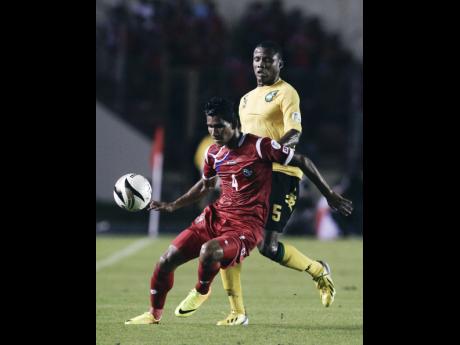 File
Powell (right) in action against Panama's Carlos Rodriguez during a World Cup qualifying match in Panama City, in 2013.

ALVAS POWELL has said sorry for walking out on the Jamaica men's national senior football team at the CONCACAF Gold Cup.

Additionally, he said the decision was his and his alone.

"I was just sorry about what happened," Powell said in an interview with The Gleaner yesterday.

"This is a decision I made on my own and it surprised everybody."

The 21-year-old left the Jamaica camp on July 15, the morning after their final Group B encounter against El Salvador at BMO Field in Toronto.

Jamaica won the game 1-0 and Powell - who had sat out the previous games against Costa Rica and Canada, came on as a substitute during the second half.

The team's head coach, Winfried Sch‰fer, had said he had no intention to recall Powell to his team initially.

However, on their return from the Gold Cup, Sch‰fer noted a change of heart and said in an interview that "the door is open".

The 65-year-old German, while stating his liking for the youth, said he didn't want the player's career to go down and allow him to suffer much public pressure.

Sch‰fer had also intimated that Powell had been influenced by his agent, Damani Ralph, who had been to several of the matches and has other national players on his roster.

Ralph, however, said he did not advise his player to leave. In fact, the former Jamaica striker said he went out of his way to try and get Powell to change his decision.

"I flew up to Canada especially to try and relieve a situation that I knew could have got worse. Sadly, it got worse," Ralph affirmed.

"I did not advise Alvas Powell to leave the camp," Ralph said. "The player can confirm this."

"When I was leaving, Damani never had nothing all to do with it. He even asked me if this is what I wanted to do, more than one time. He told me to think about it, more than once," the Portland Timbers player said.

Powell continued: "What happened has happened already. I cannot change the past. I just feel bad about the decision I made. I've gotten the chance to redeem myself, and I will not make a stupid decision like that again. That 's why I've made up my mind to go back.

"I was talking with the coach yesterday and he said he wanted the best for me. At the time when I was leaving, I wished the team nothing but good luck. Me and none of my teammates had any form of beef.

"The decision I made, I was ignorant. I was upset. I was upset that I was not playing," he explained. "I had 18 games outstanding for my club, and to come in the camp and not be playing, I was losing confidence. It was too much in my head. I couldn't manage it. People are disappointed for me."

Ralph hopes Powell will learn from the experience.

He said: "I want to make sure that at the end of the day, we're able to move forward and this can become a learning experience for a young professional."