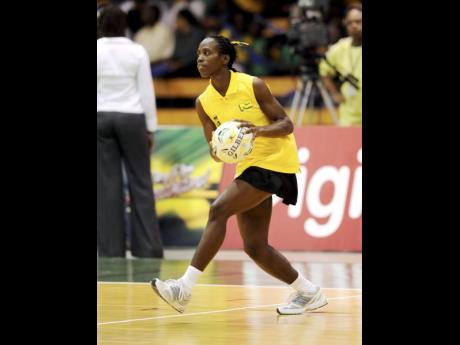 Jamaica Sunshine Girls have two of the most talented and highly rated goal shooters on the planet in Romelda Aiken and Jhaniele Fowler-Reid. But no matter how excellent a team's goal shooters are, they need players to complement them in order for the team to become successful.

In goal attack Anna-Kay Griffiths, the Sunshine Girls have that player.

Griffiths is expected to be the main supply line to the shooters, as well as provide backup shooting, but the Sunshine Girls, who has already played at the World Cup, is ready to play her part in the quest for gold Down Under.

"I am very much ready, as ready as I can be. This year is different, the focus and the team bonding has helped us to gel together and it's a beautiful feeling," she told The Gleaner before the team's departure on Thursday. "I am quite comfortable with the girls and I don't have much to focus on more than to go out there and execute.

"My game has improved a lot and I am stronger mentally and physically and I am more confident," she added.

The St Catherine Racers player, who took a two-year hiatus from international netball before returning to the squad last year, says, at first look, an opponent or spectator might underestimate her ability. However, she said, after seeing her on the court, one normally gets a total different impression, and she insists upon being ready to play her best in her supporting role to Aiken and Fowler-Reid.

"I am a silent killer. People will look at me and say that I cannot do that, but when they see me do it they don't believe. So I am a conservative person, but when I go out on the court I give it my best," Griffiths remarked.

"We have been training together and we have been doing a lot of passing (combination plays) in to Romelda and Jahniele and we seem to understand each other inside the circle, so that part of it is good.

"The environment that we are in has been perfect, so that has been a plus for us. It's for us to go out and execute. I am just focused and I know I will get the support from my coaches and my teammates, I've just got to go out and do my best," she said.