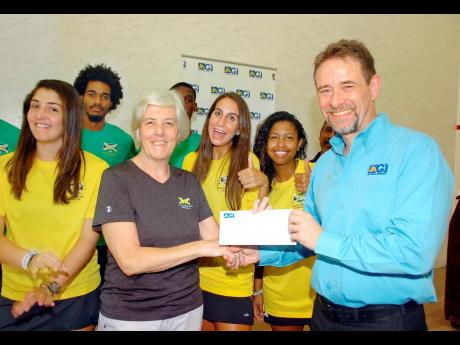 The tournament, which is the most prestigious event on the regional squash calendar, will be held in the Cayman Islands from today until August 23.

JNGI's sponsorship package includes a cash allocation towards travelling expenses as well as gear for the team. The contribution was handed over on Thursday at a send-off ceremony at the Liguanea Club, where the team was officially announced.

Expectations are high for the national squad which is the strongest selection fielded by Jamaica in recent years.

Headlining the contingent is All-Jamaica and defending Caribbean men's champion, Chris Binnie, who is seeking a record-breaking seventh regional title.

Hot on Binnie's heels is newcomer Lewis Walters, who stretched Binnie to the limit at the recent National Championships. Walters goes into the Caribbean Championships seeded at No. 2, prompting the exciting prospect of an All-Jamaican showdown in the men's finals.

The Binnie-Walters combination should also give Jamaica a major advantage in the team competition. The squad also has considerable depth with the hard-fighting Bruce Burrowes and rising stars Julian Morrison and Ashante Smith.

Morrison, who surprised his more experienced competitors with a fourth-place finish at the recent national championships, could be an upsetter at senior CASA.

Chris Hind, CEO of JNGI, said: "We are pleased to be back on board as major sponsors of the Jamaica senior squash team for the Caribbean Championships. With a particularly strong team, which includes the two best male players in the region, Jamaica are in a position to dominate Caribbean squash, and we are very proud to support the players in this effort."

Bruce Levy, vice-president of the Jamaica Squash Association, said they anticipate that they will have a lot to celebrate at this year's championships.

"Our men's team is the strongest in the region and our ladies team is a line-up of recent national champions. Yet, even with all the talent we have, it is impossible to compete on the regional stage without tangible support, and we thank JN General Insurance for their kind assistance and we hope to do our sponsors and country proud," Levy added.