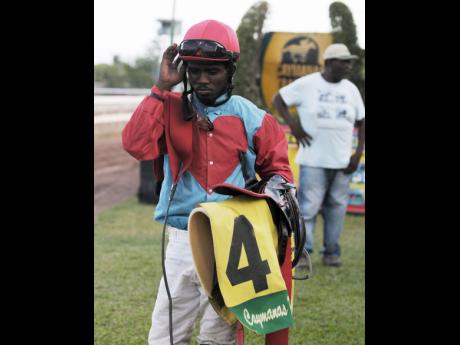 The speedy American gelding FORTUNEONEHUNDRED made it all convincingly to win the eighth running of the $1 million Seek Exercise Book Back to School Trophy open allowance feature over 1300 metres at Caymanas Park yesterday, turning the tables on recent conqueror TRADITIONAL PRINCE.

Installed a 3-2 favourite with title-chasing jockey Robert Halledeen riding for champion trainer Wayne DaCosta, FORTUNEONEHUNDRED coming off a narrow loss to TRADITIONAL PRINCE in the August 1 Betting, Gaming and Lotteries Commission Trophy over 1100 metres, beat his old rival by 1-1/2 lengths in a field of eight, covering the distance in the smart time of 1:17.3.

With less speed to contend with on this occasion, FORTUNEONEHUNDRED broke winging and led comfortably from PETE'SWILDONE (Omar Walker up), RIO COBRE and TRADITIONAL PRINCE.

He turned for home some three lengths clear of PETE'SWILD ONE and when TRADITIONAL PRINCE loomed large on the rails leaving the furlong pole, FOIRTUNEONEHUNDRED responded to a torrid right hand stick from Halledeen to hold him at bay.

A 5-y-o chestnut gelding by Keyed Entry out of My Bridlewood, FORTUNEONEHUNDRED has now won eight races from 28 starts and $4.6 million in stakes.

Walker highlighted the Seek raceday programme, sponsored by Book Empire Limited, with three winners - the 2-y-o debutante NUCLEAR AFFAIR, CLASSY PROSPECT and DREAMCOMETRUE in the final race to move to 49 winners, just one adrift of joint leaders Shane Ellis and Halledeen in the intriguing jockeys' championship.

The Seek Back to School Gimmick race over 1000 metres was won in post to post fashion by noted 5K runner Kirk Brown (7-5 favourite) ahead of Tevin Smith, who chased him relentlessly, with Andrew Gutzmore third.