Aussies too good for Girls 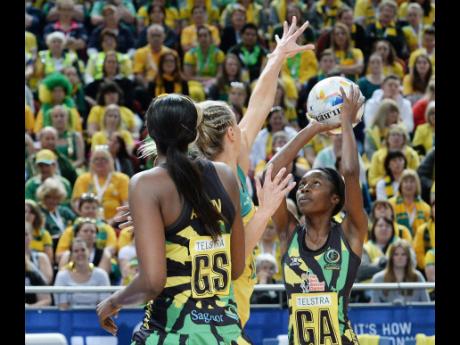 Jamaica's Sunshine Girls once again faltered at the semi-final hurdle when they went down to World number one, Australia, at the penultimate stage of the Netball World Cup yesterday.

In a virtual repeat of the last World Cup four years ago, Jamaica yet again missed out on a place in today's final when they crashed to a 67-56 defeat at Allphones Arena.

They trailed 26-35 at half-time, but had pulled within seven goals at 42-49, at the start of the final quarter. However, the Aussies outscored them 18-14 down the stretch to clinch a spot in the final against New Zealand.

The defeat for the Jamaicans left them in yet another clash for third place against England who were beaten 50-39 by the Silver Ferns.

Jamaica had the worst of the early exchanges to fall behind 1-5 after just three minutes but sparked an impressive run to claw back to 8-10 with just over seven minutes left in the quarter. Australia regrouped, however, and opened up a 15-10 lead to finish the quarter strongly.

Needing to hit back in the second quarter, Jamaica found themselves stymied by a clinical Australia, whose shooters missed just one attempt as they took control of the contest.

Caitlin Bassett was perfect en route to scoring 49 from 52 attempts overall while goal attack Natalie Medhurst, who missed the only attempt during the quarter, finished with 18 from 19.

For Jamaica, Romelda Aiken led with 33 goals from 36 attempts while Shanice Beckford supported with 14 from 16.

Meanwhile, Trinidad and Tobago edged Scotland 57-56 in an exciting extra-time affair to set up a clash for ninth place with Samoa while Barbados defeated Singapore 56-39 to seal a 13th place game with Zambia.